This website requires the use of Javascript to function correctly. Performance and usage will suffer if it remains disabled.
How to Enable Javascript
Almost Two-thirds of Americans Believe U.S. at Lowest Point in History 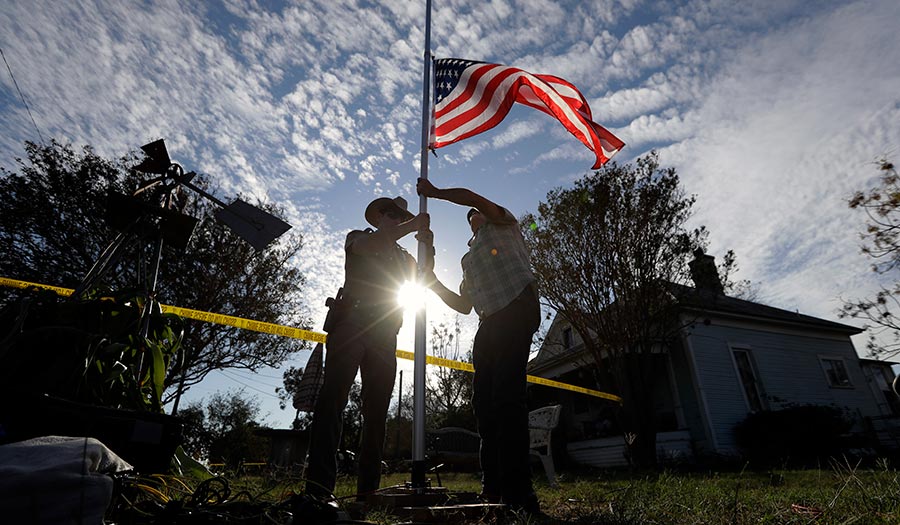 AP Photo/Eric Gay
A law enforcement officer helps a man change a flag to half-staff near the scene of the shooting at the First Baptist Church of Sutherland Springs, Texas (Nov. 6, 2017).

More than 50 million dead in World War II. Another 250,000 during the Vietnam War. Enemy states on the brink of annihilating one another during the Cuban Missile Crisis. Commercial jetliners highjacked by terrorists and slammed into buildings that became deadly infernos on September 11.

While these could be considered disquieting moments in U.S. history, none make Americans nationwide feel as stressed as they do today, with more than half of the country claiming the U.S. is at its lowest point in history, according to a poll by the American Psychological Association.

“The uncertainty and unpredictability tied to the future of our nation is affecting the health and well-being of many Americans in a way that feels unique to this period in recent history,” Arthur C. Evans Jr., PhD, APA’s chief executive officer, said.

According to the study, concern about the union overarches typical stressors such as healthcare, the economy, and terrorism.

When asked to think about the nation this year, nearly six in 10 adults report that the current social divisiveness causes them stress. A majority of adults from both political parties say the future of the nation is a source of stress, though the number is significantly higher for Democrats (73 percent) than for Republicans (56 percent) and independents (59 percent).

Watching news is also stressful for the majority of Americans. While 95 percent follow news regularly to stay informed, 56 percent say that doing so is stressful and 72 percent believe the media is given to exaggeration.

“With 24-hour news networks and conversations with friends, family and other connections on social media, it’s hard to avoid the constant stream of stress around issues of national concern,” Dr. Evans said. “These can range from mild, thought-provoking discussions to outright, intense bickering, and over the long term, conflict like this may have an impact on health. Understanding that we all still need to be informed about the news, it’s time to make it a priority to be thoughtful about how often and what type of media we consume.”