This website requires the use of Javascript to function correctly. Performance and usage will suffer if it remains disabled.
How to Enable Javascript
Amid Sky-high Inflation, Venezuela Unveils 100,000 Bolivar Bill Worth $2 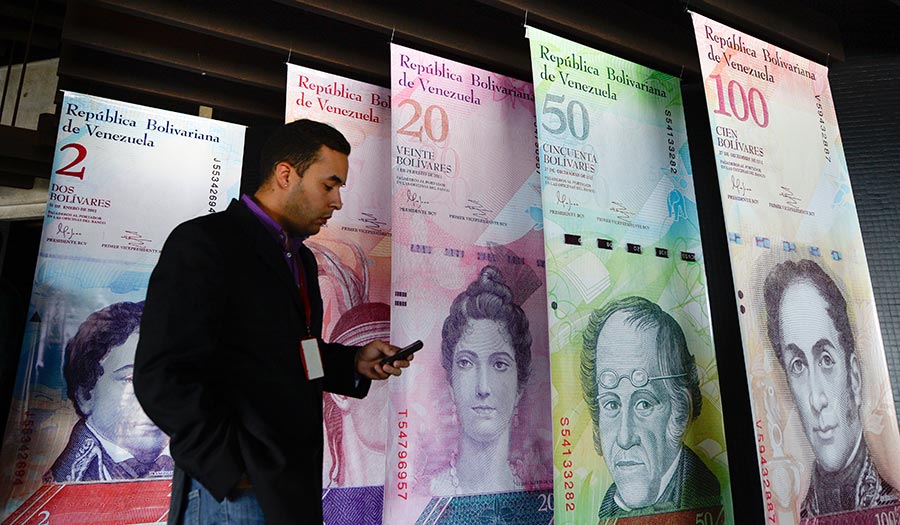 Federico Parra/AFP/Getty Images
A man walks past banners showing Venezuela’s currency, the bolivar, at the Central Bank of Venezuela (BCV) in Caracas (Dec. 7, 2016). The BCV presented new bank notes, including a 20,000 bolivars bill, to counter hyperinflation.

Venezuela’s government, led by President Nicolas Maduro, took drastic action on November 2 in an attempt to mend the nation’s flaccid economy. It introduced a 100,000 bolivar bill.

Reportedly worth just $2.3 on the black market, the new note represents “only a stop-gap measure amidst a more comprehensive financial overhaul, one facet of which is to eventually rid the country of paper money entirely” Deutsche Welle reported.

The news outlet added that at the start of 2017 “the government began issuing new 500, 5,000 and 20,000 bolivar notes after a year in which consumer prices rose 800 percent. Residents in Caracas must line up for hours in front of cash machines to withdraw miniscule amounts.”

Though Venezuela holds the largest oil reserves in the world, it is grappling with the highest inflation in the world.

Last month, Business Insider reported that “the stricken South American nation of Venezuela—which has seen its economy collapse with the drop in oil prices in recent years—has by far the highest inflation of any nation measured by the WEF. Venezuela’s inflation rate is in excess of 250%, more than 10 times that of any other country.”

Some predict that inflation in Venezuela could pass 1,000 percent in 2017. Dropping oil prices—Venezuela’s main commodity—paired with failing government policies, such as the privatization and subsequent abandonment of farmland, have left the country heavily dependent on imports for vital consumables such as food and medicine.

Inflation has caused some Venezuelans to move away from the use of money altogether.

“The cash shortage is already being felt in the daily lives of Venezuelans like Granadillo, who said his weekly income has slipped more than 50 per cent as customers use the bills they are able to obtain to purchase food instead of comparative luxuries like a watch repair,” Australian Associated Press reported. “Instead of cash, he has recently begun accepting a new form a payment: a kilo of ham, chicken or beef in exchange for a newly ticking watch. ‘You have to find a way to eat,’ Granadillo said.”

The crisis has led to massive anti-government protests, which have been met with severe crackdowns that have injured at least 15,000 and killed 160.

To combat the severe inflation, Mr. Maduro is pushing for economic restructuring.

“But any restructuring is set to be fearsomely complex,” The Wall Street Journal stated. “Holders of some $64 billion in bonds issued by the government and PDVSA may be pitted against bilateral creditors including China and Russia, where economic considerations will be combined with political and diplomatic motives; the total amount of debt is pegged at between $100 billion and $150 billion, according to Exotix Capital, a brokerage. Low bond prices may have allowed investors to build up stakes large enough in some securities to block restructuring, echoing complications both Greece and Argentina faced with holdout creditors.”

The newspaper quoted a paper by attorney Lee Buchheit and Duke Law’s Mitu Gulati and sovereign-debt restructuring experts, which put any solution in Venezuela on the same level of difficulty as Napoleon Bonaparte’s invasion of Russia in 1812.

Yet, The Wall Street Journal concluded, “With oil, China, Russia, the U.S., financial markets and Venezuelan politics in the mix, that may even understate the complexity.”