This website requires the use of Javascript to function correctly. Performance and usage will suffer if it remains disabled.
How to Enable Javascript
What to Watch During President Trump’s Asia Visit

What to Watch During President Trump’s Asia Visit 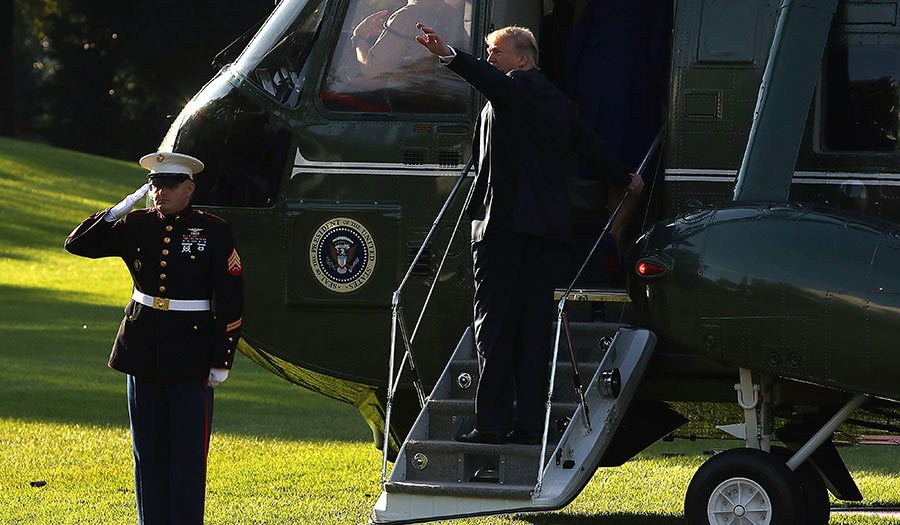 U.S. President Donald Trump waves as he boards Marine One while departing from the White House in Washington, D.C. (Nov. 3, 2017). President Trump is embarking on a five-country, 10-day tour throughout Asia.

United States President Donald Trump strode across the White House lawn to board Marine One Friday morning to begin a 10-day trip throughout nations in Asia. This will be the president’s first visit to the continent as leader of his nation.

The White House released details regarding the president’s trip, which is intended to “underscore his commitment to longstanding United States alliances and partnerships, and reaffirm United States leadership in promoting a free and open Indo-Pacific region,” the White House reported on its website.

Following is Mr. Trump’s itinerary and key things to look for during each stop.

Air Force One will touch down in Japan on Sunday, November 5, after a two-day stop in Hawaii, where the president will receive a briefing from the U.S. Navy’s Pacific Command. In Tokyo, President Trump will “meet with American and Japanese service members, and participate in bilateral meetings with Prime Minister Shinzo Abe, who will also host the President for a meeting with the families of Japanese citizens abducted by the North Korean regime,” according to the White House.

On November 7, Mr. Trump will arrive in South Korea, where he “will participate in a bilateral meeting with President Moon Jae-in and visit American and South Korean service members,” the White House reported. “The President will speak at the National Assembly, where he will celebrate the enduring alliance and friendship between the United States and the Republic of Korea, and call on the international community to join together in maximizing pressure on North Korea.”

President Trump will visit with Chinese President Xi Jinping on November 8. The American leader will likely discuss stepping up pressure on North Korea with Mr. Xi, who recently consolidated his power over his Communist Party.

According to NPR: “Aides say the administration is pleased with steps China has taken so far—such as halting purchases of North Korean coal—but add that all countries need to do more. In September, China’s central bank ordered financial institutions throughout the country to stop doing business with North Korea.”

In addition, Mr. Trump “wants to press China for more balanced trade. He complained…during the campaign about the U.S. trade deficit with China, which topped $300 billion last year. The administration argues that China unfairly restricts imports from the U.S. In October, the Commerce Department ordered anti-dumping tariffs on imports of Chinese aluminum foil.”

The White House stated that the president will arrive in Danang, Vietnam, on November 10 to “participate in the Asia-Pacific Economic Cooperation (APEC) Economic Leaders’ Meeting and deliver a speech at the APEC CEO Summit. In the speech, the President will present the United States’ vision for a free and open Indo-Pacific region and underscore the important role the region plays in advancing America’s economic prosperity. On November 11, the President will travel to Hanoi, Vietnam for an official visit and bilateral engagements with President Tran Dai Quang and other senior Vietnamese leaders.”

A key goal for the president is to foster closer military ties with Vietnam to help counter China’s growing power in the region. Washington has already been working with Vietnam to reduce its dependence on Russia for war equipment.

The American president will last visit the Philippines from November 12 to 13.

Next, he will hold a series of meetings with Philippines President Rodrigo Duterte in an attempt to set “the stage for a rapprochement between the U.S. and the Philippines,” Forbes reported. “Duterte may have gone on record about his ‘separation from the United States,’ saying that ‘America has lost’ to China, but the military advisors helping him defeat Islamist rebels on the southern Philippine island of Mindanao are U.S. special forces, not Chinese. Trump is likely to take a firm line with Duterte on support for U.S. priorities. The simple fact is that the Philippines is economically and militarily irrelevant to the United States, but Duterte relies on America for his very survival.

“Trump will surely demand that Duterte stop cozying up to China. It’s hard to see how Duterte could resist. Contrary to popular perceptions, when the game gets competitive it’s still the U.S. that holds all the cards in the Asia-Pacific. With the pathological exception of North Korea, none of China’s neighbors is concerned about the presence of a U.S. aircraft carrier in the region. All of them are concerned about Chinese aircraft carriers.”