This website requires the use of Javascript to function correctly. Performance and usage will suffer if it remains disabled.
How to Enable Javascript
Amid Rise in Exorcisms, Catholic Church Provides New Anti-occult Tools 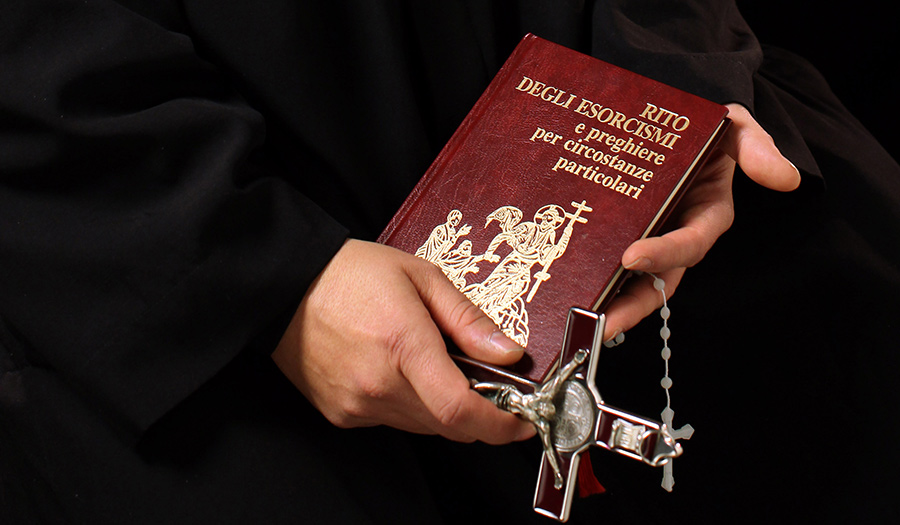 A Catholic priest—who is part the Vatican’s team of anti-occult priests—holds items used during exorcism rituals in Rome, Italy (Jan. 12, 2012). At the city’s Regina Apostolorum Pontifical Atheneum, he teaches classes on the dangers of magic, occultism and Satanism.

As trick-or-treaters and partygoers don costumes of ghouls and demons for Halloween, the world’s largest religious organization is stepping up efforts to combat what many see as a ramp up in actual spiritual activity.

In October, the United States Conference of Catholic Bishops (USCCB) released an English translation of their exorcism ritual to allow more church leaders to perform the rite. The volume comes at a time of increased demand for exorcisms.

“Exorcism is more readily available today in the United States than perhaps ever before,” Michael Cuneo, a sociologist at Fordham University, wrote in his newly published book, American Exorcism.

ABC News reported: “Cuneo suggests that though the hit book and movie The Exorcist brought the subject national attention in the 1970s, exorcism has grown more popular in the past two decades. The Catholic Church has at least 10 official exorcists around the United States, nine more than a decade ago, Cuneo says…‘By conservative estimates, there are at least five or six hundred evangelical exorcism ministries in operation today, and quite possibly two or three times this many,’ he writes, in addition to numerous exorcisms performed by charismatic, Pentecostal and other brands of Christianity.”

Originally produced in Latin, the book “Exorcisms and Related Supplications” from the USCCB has been made available in English and is available primarily for “bishops, though exorcists, other clergy, scholars and seminary professors also can obtain a copy with the permission of a bishop,” Catholic News Service reported.

The English version was released with the intention that it could help those who are possessed to better be able to comprehend the words being said during an exorcism rite.

Exorcisms are not just increasing in America. In the article “Why Exorcisms Are on the Rise in France,” The Economist reported how, on the internet, “a host of private exorcists, healers, mediums, kabbalists, shamans and energiticians offer…services, for fees as high as €500 [$582] per ceremony. Some offer to help a business out of a bad patch, or to restore love to a failing relationship. Many help with supposed hauntings of properties. One self-declared exorcist near Paris says he earns as much €12,000 [$13,981] a month (before tax) by working 15-hour days, including consultations by phone.”

The Real Truth looks at such activity through a biblical lens. While this publication does not endorse the views of professing Christianity, it is clear that spiritism is on the rise. To learn more, read Demystifying the Spirit Realm.