This website requires the use of Javascript to function correctly. Performance and usage will suffer if it remains disabled.
How to Enable Javascript
Philippines Courts Russia and China as U.S. Influence Wanes 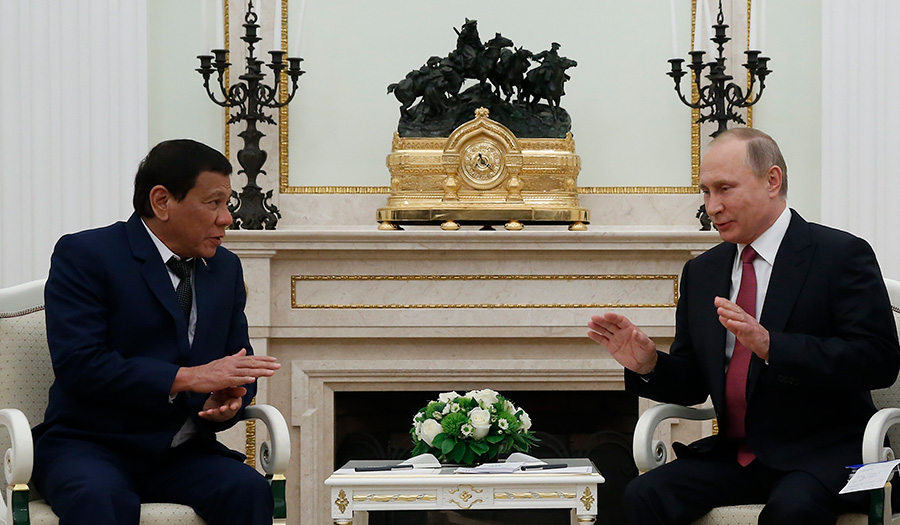 Maxim Shemetov/AFP/Getty Images
Russian President Vladimir Putin meets with his Philippine counterpart Rodrigo Duterte at the Kremlin in Moscow (May 23, 2017).

Even as the Philippines celebrates the liberation of the southern town of Marawi from Islamic State militants and the United States lauds its involvement in the mission, Manila’s relationship with the Western power continues to be rocky.

“The timing of U.S. Defense Secretary Jim Mattis’ trip to the Philippines [last week] couldn’t have been better, coming just as it celebrated a victory against Islamist militants in Marawi City—with a critical dose of help from the U.S. military,” Reuters reported.

“But as Mattis met President Rodrigo Duterte on October 24, five Russian warships were parked off the Philippines and Moscow was preparing to formally hand over thousands of assault rifles, a million rounds of ammunition and 20 army trucks at a public ceremony [on October 25].”

After Marawi, a center of Islamic faith in the predominantly Roman Catholic Philippines, was attacked by ISIS militants five months ago, the military launched a ground offensive and airstrikes with the U.S. and Australia deploying surveillance aircraft to aid its efforts.

While Mr. Duterte, who has made clear his anti-American stance and has openly distanced himself from the U.S. since taking office, thanked the U.S. and Israel for their military cooperation during the 43rd Philippine Business Conference, he directed the bulk of his comments to China, whose ambassador was present at the meeting.

“It was only China who gave it on time and plenty, plenty…We needed it badly, you gave it to us,” he said.

“And of course the Americans just provided the [equipment]—we just borrowed it, we have returned it already.”

“They are not willing to give it to us unlike China.”

“Since coming to office in June, Duterte has sought to diversify his country’s foreign policy away from its traditional ally the United States and toward other major powers with whom the Philippines has not had close ties with previously, most notably China (though Russia is another interesting case),” The Diplomat reported.

In March of this year, the Philippines and China engaged in joint coast guard exercises for the first time. Then two months later, various media outlets reported that Mr. Duterte was looking to buy arms from the larger country. He also expressed interest in making deals with Russia.

Despite a dispute about sovereignty over the South China Sea, Beijing has softened its approach to charm Mr. Duterte, offering him infrastructure investment and military assistance against Muslim rebels, while agreeing to allow Philippine fishermen to return to their traditional grounds in Scarborough Shoal, which China seized in 2012.

The approach seems to be working. The results of a recent Pew Research Center survey show two-thirds of Filipinos believe strong economic relations with China are of greater importance, as opposed to 28 percent who say getting tough with China over territorial disputes is more important. When last asked the question in 2015, Filipinos were divided almost evenly on what was more important.

U.S. Ambassador to the Philippines, Sung Kim, said regardless of its interactions with U.S. rivals Russia and China, the U.S. relationship to its oldest ally in Asia is thriving.

“The U.S. is one of the largest foreign investors in the Philippines and the U.S. is the Philippines’ third-largest trading partner,” he said during a meeting with foreign correspondents. “As investors, employers, and exporters, U.S. companies here have contributed greatly to our two countries’ relations.

“Our close bonds are reinforced by the more than four million Filipinos and Filipino-Americans in the United States who are helping to shape the political and economic future of both countries.”

Mr. Kim dismissed any arms dealings between the three countries as the exchange of “some rifles.”

“I’m not really threatened by this notion that China or Russia are providing some military equipment to the Philippines,” Mr. Kim told reporters (Reuters).

“We have been providing very important equipment to the Philippines for many, many years. The fact that the Chinese and the Russians have provided some rifles, I’m not sure is really such a cause for concern for the United States.”

The U.S. and the Philippines are decades-old treaty allies, but the relationship has been rocky in recent years. One point of contention under President Barack Obama was government-sanctioned killings as part of President Rodrigo Duterte’s crackdown on drug suspects.

President Donald Trump, however, has praised Mr. Duterte for his actions. The two men plan to meet when Mr. Trump travels to the Philippines next month as part of an Asia tour.