This website requires the use of Javascript to function correctly. Performance and usage will suffer if it remains disabled.
How to Enable Javascript
Growing Homeless Numbers Driving California’s Deadly Hepatitis Outbreak 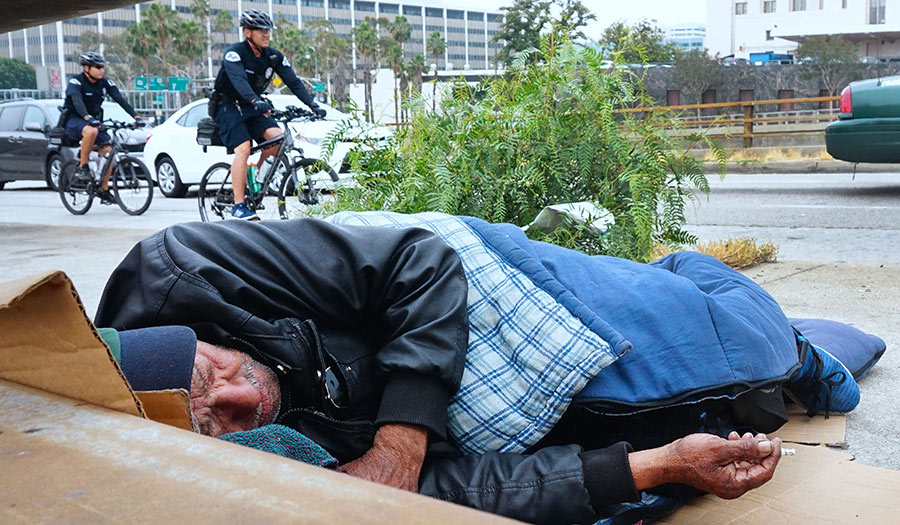 Frederic J. Brown/AFP/Getty Images
Derelict: A homeless man naps with cigarette in hand at his encampment on a downtown sidewalk in Los Angeles (June 7, 2017). Southern California’s growing homeless population is increasing the spread of hepatitis A.

An increasing homeless population in California cities, including San Diego, Los Angeles, San Francisco, and Santa Cruz, are a significant factor in the state’s recent hepatitis A outbreak, officials stated. The contagious virus, which affects the liver, has killed 19 since last November and continues to spread.

The disease typically kills one out of every 100 it infects and is transmitted person-to-person through contact with fecal matter, sexual contact, or consumption of contaminated food or water. Yet the death rate for the California outbreak is three times higher due to its prevalence among homeless—who lack access to sanitation and are often illicit drug users.

Dr. Gil Chavez, deputy director for infectious diseases at the California Department of Public Health, told CNN that hepatitis A “survives in the environment for a long time, so unless you wash it away, it can linger for weeks. The more we can provide access to sanitation, the more that we can clean regularly and disinfect, the quicker we can get a handle on this.”

Cities where the outbreak is occurring have increasing homeless populations. The homeless population of San Diego, where over 500 cases of hepatitis A have been reported, has increased by 10 percent since last year to 5,000, according to the Regional Task Force on the Homeless. In Los Angeles, homeless numbers have jumped 20 percent over 2016.

San Diego’s Public Health Services have been attempting to stop the spread of the virus among vulnerable populations by installing portable bathrooms, bleaching streets, and establishing handwashing stations, yet the number of cases continues to rise.

Homeless are also prone to the disease because they are less likely to be vaccinated—a treatment that has been mostly effective in staving off hepatitis A outbreaks since its development 20 years ago.

California Governor Jerry Brown declared a state of emergency on October 13 in an effort to help sanitation and vaccination supplies reach the homeless. Public health workers, however, have found it difficult to reach homeless communities.

“One of the things that we’ve learned since March is that a lot of the usual ways to vaccinate communities don’t work very well with [the homeless] community,” Dr. Chavez told CNN. “You cannot just say, ‘We’re holding a vaccination clinic at a certain place’ and expect that people are going to show up.”

The California outbreak is the second largest outbreak of hepatitis A in the United States since the development of a vaccine 20 years ago.