This website requires the use of Javascript to function correctly. Performance and usage will suffer if it remains disabled.
How to Enable Javascript
84 Percent of Puerto Ricans Still in the Dark

84 Percent of Puerto Ricans Still in the Dark 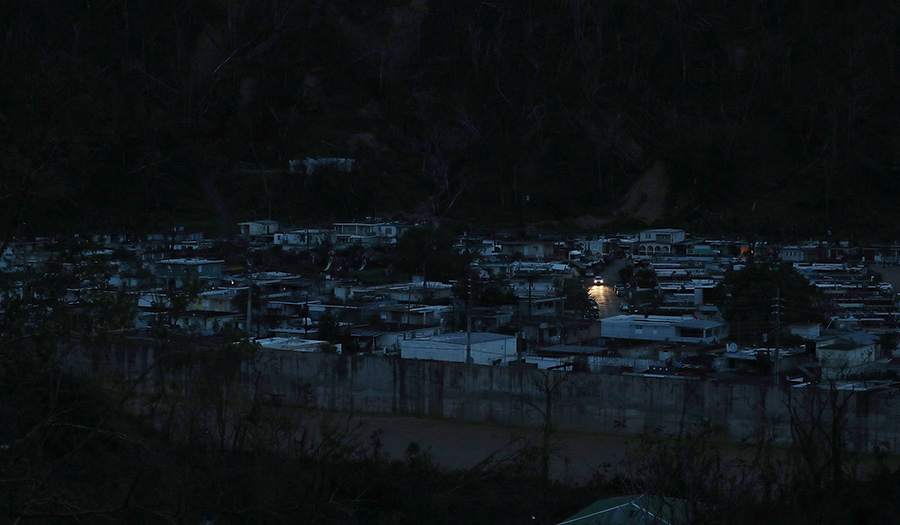 Blackout: A car passes among dark homes as people wait for electricity to be restored after Hurricane Maria in Utuado, Puerto Rico (Oct. 6, 2017).

Four weeks after Hurricane Maria brought widespread destruction across Puerto Rico, more than 4 out of 5 residents on the U.S. territory remain without power.

Conditions remain dire for the 3.4 million residents on the commonwealth island who also lack water and access to healthcare, communications and transportation services.

Governor Ricardo Rossello said during a news conference on October 13 that there are no estimates as to when power will be fully restored, but he expects it to reach “25 percent” of residents “within the next month.”

Yet many are less optimistic. Maria Aguilera told The New York Times, “From the things I’ve seen with the infrastructure, it could be months.”

Health services are virtually paralyzed due to the lack of electricity. Although 98 percent of the island’s hospitals are open, most rely on generators that operate inconsistently because of fuel shortages.

According to Business Insider: “Supplies of life-saving medications like oxygen and insulin are running out. Some of them have spoiled. In other cases, there simply isn’t enough to go around.”

“People with diabetes and other life-threatening diseases who rely on refrigeration to keep their medications stable remain some of the most vulnerable on the island. Six days after the storm hit, [Maritza Stanchich, a professor of Caribbean studies at the University of Puerto Rico,] told Business Insider that during a visit to see a neighbor in the hospital, she came across a woman crying in the hallway.

“‘She was pleading for ice because her husband’s insulin was out,’ Stanchich said.”

Authorities raised the death toll from Hurricane Maria to 48 as of October 14, with the most recent deaths the result of people not able to receive treatments for health problems. At least 117 people are still missing.

The island’s infrastructure remains in bad shape. According to The New York Times, transportation of materials has become difficult because, of Puerto Rico’s 5,073 miles of roads, only 392 miles are open.

In addition, 67 percent of the island’s cell towers are down, preventing many from using cellular service.

Thirty-seven percent still do not have drinking water, and people without running water have resorted to bathing and washing their clothes in contaminated streams as well as drinking from condemned wells, according to The Associated Press.

Drew Koslow, an ecologist with nonprofit Ridge to Reefs, who spent a week helping set up water purification systems in Puerto Rico, told AP, “People in the U.S. can’t comprehend the scale and scope of what’s needed.”