This website requires the use of Javascript to function correctly. Performance and usage will suffer if it remains disabled.
How to Enable Javascript
Rohingya Flee Burning Villages for Monsoon-drenched Camps 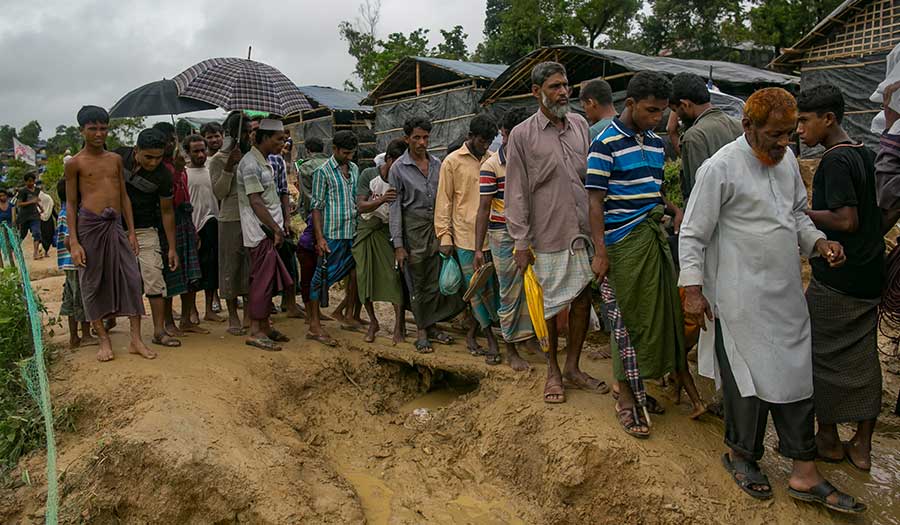 For generations, Rohingya Muslims have called Myanmar’s Rakhine State their home. Now, in what appears to be a systematic purge, the minority ethnic group is being wiped off the map.

After a series of attacks by Muslim militants last month, security forces and allied mobs retaliated by burning down thousands of Rohingya homes in the predominantly Buddhist nation.

More than 500,000 people—roughly half the Rohingya population—have fled to neighboring Bangladesh in the past year, piling into wooden boats that take them to sprawling, monsoon-drenched refugee camps in Bangladesh.

Ms. Suu Kyi told the world that even with an estimated 412,000 Rohingya fleeing to Bangladesh in less than a month as their villages burned and hundreds were killed, the “great majority” of Muslims within the conflict zone stayed and that “more than 50 percent of their villages were intact.”

The Nobel Peace laureate’s global image has been tarnished by violence since Rohingya insurgents attacked Myanmar security forces on August 25. Rohingya fled during the military crackdown that followed. Many of their villages were in flames when they left.

“We want to understand why this exodus is happening,” Ms. Suu Kyi added. “We would like to talk to those who have fled as well as those who have stayed.”

The government has blamed the Rohingya themselves, but members of the persecuted minority have said soldiers and Buddhist mobs attacked them.

Ethnic Rohingya have long faced discrimination in Myanmar and are denied citizenship, even though many families have lived there for generations.

The UN has labeled the Rohingya one of the world’s most persecuted religious minorities. Top officials, including Secretary-General Antonio Guterres, have previously expressed concerns about possible “ethnic cleansing” perpetrated against the Muslim group.

Bangladesh is struggling to keep up with the massive influx of refugees.

“Now we can’t even buy plastic to make a shelter,” said 32-year-old Kefayet Ullah of the camp in Bangladesh where he and his family are struggling to get from one day to the next.

In Rakhine, they had land for farming and a small shop. Now they have nothing.

“Our heart is crying for our home,” he said, tears streaming down his face. “Even the father of my grandfather was born in Myanmar.”

This is not the first time the Rohingya have fled en masse.

Hundreds of thousands left in 1978 and again in the early 1990s, fleeing military and government oppression, though policies were later put in place that allowed many to return. Communal violence in 2012, as the country was transitioning from a half-century of dictatorship to democracy, sent another 100,000 fleeing by boat. Some 120,000 remain trapped in camps under apartheid-like conditions outside Rakhine’s capital, Sittwe.

But no exodus has been as massive and swift as the one taking place now. World leaders and human rights watchdogs have voiced concerns about the current Rohingya catastrophe.

“There are a lot of weak and malnourished children among the new arrivals,” UNICEF’s representative in Bangladesh, Edouard Beigbeder, said in an email. “If proper preventive measures are not taken, highly infectious diseases, especially measles, could even cause an outbreak.” Many are suffering from diarrhea, dehydration, skin diseases or worse.

In a state hospital, a Rohingya man who identified himself as Rahmatullah was looking over his 10-year-old son recovering from a bullet that left a deep wound as it pierced his right leg.

“Why did they shoot him? What's his crime? He is just a child,” Rahmatullah said. “They came and started shooting indiscriminately.”

Eric P. Schwartz, head of the U.S.-based charity Refugees International and a former assistant secretary of state for population, refugees and migration, said he could not recall seeing so much misery and called for international pressure on Myanmar to stop the violence.

“The stories that we are hearing. I visited a hospital yesterday, children ages 1, 5, 10 suffered burn wounds, gunshot wounds and with human beings essentially treated like animals,” he said.

Days after fleeing their village on the Myanmar side of the border fence, a group of Rohingya Muslims watched from just inside Bangladesh as yet another house went up in flames.

“You see this fire today,” said Farid Alam, one of the Rohingya who watched the fire burn from about 500 yards away. “That is my village.”

The villagers said they had escaped days ago, crossing into Bangladesh at the border point of Tumbru and joining thousands of other ethnic Rohingya huddling in the open in the district of Bandarban to escape recent violence in Buddhist-majority Myanmar.

“We had a big house, we are 10 people in the family, but they burned our home,” Mr. Alam said as he watched the other house burning Friday. “My father was a village doctor, we had a medical store. We had land and cattle, all are gone.”

Abul Bashar, a 73-year-old Rohingya in Bandarban, said he traveled 15 days on foot to reach Bangladesh, and was separated from the rest of his family.

He took nothing with him as he fled.

“I have lost everything,” he said. “Our homes were burned…It was painful, very painful.”

Elsewhere, along a fence near the Kutupalong refugee camp in Bangladesh’s border district of Cox’s Bazar, men, women and children ran after aid trucks as volunteers tossed clothing and packets of dry food.

“This is desperate. It’s one of the biggest man-made crises and mass movements of people in the region for decades,” Martin Faller, a deputy regional director of the International Federation of Red Cross and Red Crescent Societies, said in a statement.

“People have no food, water or shelter and they are in desperate need of support. No one should have to live like this,” Mr. Faller said.