This website requires the use of Javascript to function correctly. Performance and usage will suffer if it remains disabled.
How to Enable Javascript
Reports of “Mass Killings” Spark Fears of Genocide in Myanmar

Reports of “Mass Killings” Spark Fears of Genocide in Myanmar 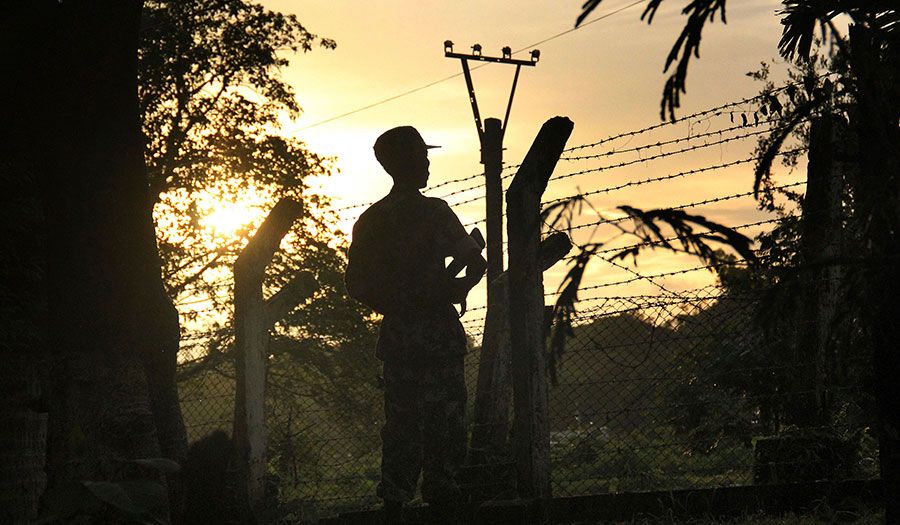 At attention: A border guard stands at his police post that was previously attacked by a Muslim militant group in Kyee Kan Pyin village in Myanmar (July 14, 2017).

United Nations officials and human rights leaders are concerned ethnic cleansing is taking place in Myanmar’s Rakhine state where hundreds of Rohingya Muslims are dead and more than 270,000 have fled the country for neighboring Bangladesh.

The exodus began on August 25 when Rohingya insurgents belonging to the Arakan Rohingya Salvation Army—ARSA—attacked Myanmar police and paramilitary posts in what they claimed was an effort to protect their ethnic minority from persecution by security forces in the majority-Buddhist country. While most of Myanmar’s estimated one million Rohingya live in the country’s northern Rakhine state, the government does not recognize them as a legitimate native ethnic minority, which leaves them without citizenship and basic rights.

In response to ARSA’s actions, the military performed what it has called “clearance operations” to root out insurgents.

A statement by Myanmar’s military said there have been a total of 90 armed clashes, including the initial 30 attacks by insurgents, which makes the combat more extensive than previously announced. The death toll, posted on the Facebook page of Myanmar’s military commander, is a sharp increase over the previously reported number of slightly more than 100. The statement said all but 29 of the 399 dead were insurgents.

Advocates for the Rohingya say “clearance operations” have included security forces and vigilantes attacking and burning villages, shooting civilians, and causing others to flee. Hundreds of civilians have been killed, they say, and have posted photos, videos and details on social media as evidence.

In one such video, published by The New York Times, a man surveys the smoldering ruins of his village and, in another, a man points to mass graves he claims are filled with 10 to 20 bodies each.

Among those fleeing the violence is Sham Shu Hoque, 34, who crossed the border with 17 family members. He said he left his village of Ngan Chaung on August 25 after it was attacked by Myanmar security forces who shot at villagers. He said troops also used rocket-propelled grenades and helicopters fired some sort of incendiary device.

Five people were killed in front of his house, Mr. Hoque said. His family survived the attack but was told by the soldiers to leave. They took a week to reach Bangladesh, hiding in villages along the way.

The government blames insurgents for burning their own homes and killing Buddhists in Rakhine yet it is nearly impossible to verify information issued by either government officials or Rohingya sympathizers as Myanmar has barred most journalists from the area.

“Survivors and eyewitnesses from Chut Pyin told Fortify Rights that soldiers and armed residents burned every house in the village,” the group said in a statement. It said survivors who returned to the village after the attackers left estimated the death toll there to be more than 200.

Fortify Rights quoted a 41-year-old survivor identified by the pseudonym “Abdul Rahman” as saying that soldiers killed and burned his brother along with other victims.

“We found [my other family members] in the fields,” the organization quoted the man as saying. “They had marks on their bodies from bullets and some had cuts. My two nephews, their heads were off. One was 6 years old and the other was 9 years old. My sister-in-law was shot with a gun.”

Government accusations of atrocities committed by insurgents are less detailed.

“Some of the ethnic natives while on their way were brutally butchered by the terrorists applying inhuman ways without any reason,” the military statement said. It stated that insurgents were “using various terrorism tactics under well-hatched plots, attacking security forces on duty with superior force, mingling with villagers after running away from security forces in hot pursuit of them, cutting off communication lines, and spreading false information to get outside help.”

U.S.-based Human Rights Watch said it has obtained satellite images that suggest there are burning villages across a large swath of Rakhine state. It said the locations match some of the accounts given by people who have fled into Bangladesh of settlements that have been attacked and destroyed by Myanmar soldiers, police and armed civilians.

“The government has to stop this offensive,” Phil Robertson, deputy Asia director for Human Rights Watch, said. “It has to allow humanitarian assistance and let journalists into this area. We have to actually see what’s happened because quite clearly human rights violations have taken place.”

“No, no, it’s not ethnic cleansing. It’s a new problem,” she said in an interview clip published by The New York Times. “And yet it’s linked to old problems as well.”

UN Secretary-General Antonio Guterres says it is crucial that Myanmar’s government immediately give Muslims either nationality or legal status so they can lead normal lives and freely move, find jobs, and get an education.

The UN chief reiterated his condemnation of attacks by Rohingya insurgents and said that the UN is now receiving “constant reports of violence by Myanmar’s security forces, including indiscriminate attacks.” He also warned that it will further increase radicalization.

UN special rapporteur on the human rights situation in Myanmar, Yanghee Lee, echoed the assessment of Mr. Guterres in a statement released by the UN Human Rights Office of the High Commissioner.

“If human rights concerns are not properly addressed, and if people remain politically and economically marginalized, then northern Rakhine may provide fertile ground for radicalization, with people becoming increasingly vulnerable to recruitment by extremists.”