This website requires the use of Javascript to function correctly. Performance and usage will suffer if it remains disabled.
How to Enable Javascript
DACA Is Ending, But What Is It?

DACA Is Ending, But What Is It? 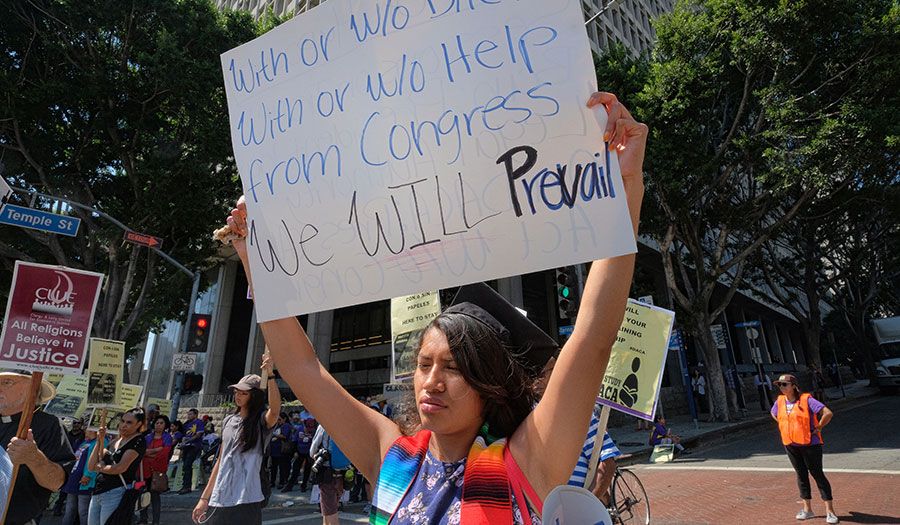 The White House’s September 5 move to rescind Deferred Action for Childhood Arrivals has caused a firestorm of debate. Attorney General Jeff Sessions said the program will end in six months, a period intended to give Congress time to find a legislative solution.

Those against DACA say it is unconstitutional. They feel President Donald Trump made the right decision by ending the order put in place by President Barack Obama.

Conversely, champions of DACA feel that, without the program, many of the 800,000 immigrants enrolled in it who currently receive protection from deportation will face being sent back to their birth countries.

The editorial board of USA Today stated that DACA-enrolled immigrants are more assimilated into American culture than other immigrant groups, and their departure would be “disruptive” to their communities and the economy: “Many have become small business owners or have highly coveted job skills.”

As is common with heated ideological debates, many are making up their minds about DACA based on emotions and political leanings—without really understanding the basics of the program.

DACA was created by President Obama in 2012 after intense pressure from immigrant advocates who wanted protection for young immigrants who were mostly raised in the U.S.

The program grants them a two-year reprieve from deportation that can be extended, as well as issues them a work permit and a Social Security number.

DACA recipients must meet several requirements, including having no criminal record. Immigrants who are accepted into the program and later get arrested face deportation to their home country.

They also must have been 30 or younger when the program was launched and brought to the U.S. before age 16.

The application cost is nearly $500, and permits must be renewed every two years. Application and renewal each take several weeks, and many immigrants hire lawyers to help navigate the process.

DACA does not give beneficiaries legal U.S. residency—they are given a reprieve from deportation while being allowed to legally work.

The overwhelming majority of DACA recipients are from Mexico. One in four total recipients live in California.

Frustration grew during the Obama administration over repeated failures to pass the Dream Act, which would have provided a path to legal U.S. citizenship for young immigrants brought to the country as children.

The last major attempt to pass the legislation was in 2011.

Immigrant activists staged protests and participated in civil disobedience in an effort to push President Obama to act after Congress did not pass legislation. DACA is different than the Dream Act because it does not provide a pathway to legal residency or citizenship.

President Trump was under pressure from several states that threatened to sue his administration if it did not end DACA. Mr. Trump declared on the campaign trail that the program was illegal executive amnesty.

White House officials argue that the order Mr. Obama issued was unconstitutional and that Congress should take charge of legislation dealing with the issue. They say the program would not have survived legal challenges in the courts.

What Is Next for DACA Recipients?

If their permits expire before March 5, 2018, they are eligible to renew them for another two years if they apply by October 5.

People who miss the October deadline will be disqualified from renewing their permission to remain in the country, although the Trump administration has said it will not actively provide their information to immigration authorities.