This website requires the use of Javascript to function correctly. Performance and usage will suffer if it remains disabled.
How to Enable Javascript
Kenya’s Election Reversal Raises Specter of Violence 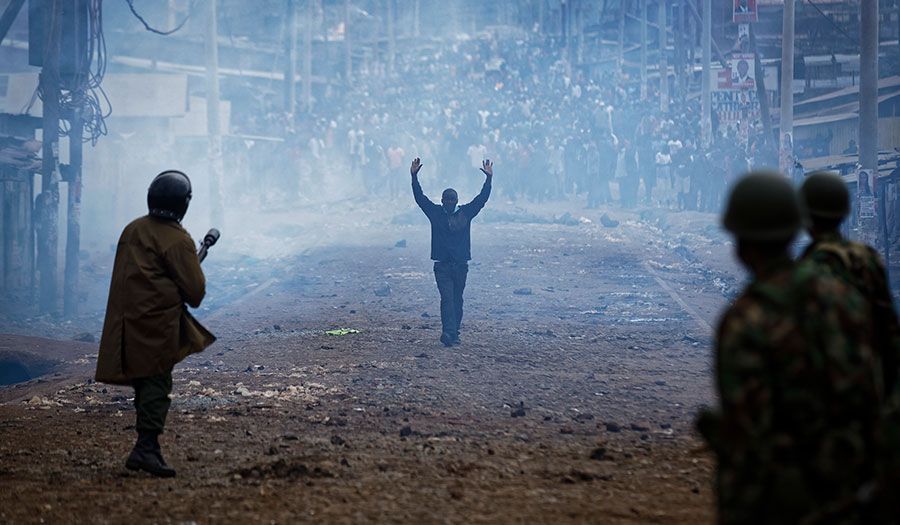 AP/Ben Curtis
Vote violence: A man seeking safety walks through a cloud of tear gas toward riot police, as they clash with post-election protesters throwing rocks in the Kawangware slum of Nairobi, Kenya (Aug. 10, 2017). There are fears that similar violence will occur surrounding fresh presidential elections scheduled for October 17.

NAIROBI, Kenya – Speaking at a Sunday church service, Kenya’s opposition leader Raila Odinga stated that he is not open to a power-sharing arrangement. His comments come days after a Supreme Court decision annulled President Uhuru Kenyatta’s re-election and ordered a new presidential election after 60 days.

President Uhuru Kenyatta voiced similar sentiments the day before when addressing elected members of county assemblies from his Jubilee Party.

Mr. Odinga, 72, was named Prime Minister and Kenyatta his deputy in a coalition government in 2008 February following the disputed presidential election of Dec 27, 2007. More than 1,000 people died and 600,000 were evicted from their homes in post-election violence that erupted from that vote.

Mr. Odinga said the present electoral commission should not to conduct the fresh election, saying it was complicit in electoral fraud.

However, Mr. Kenyatta has said the electoral commission should not be interfered with and warned the court against taking action on the Independent Electoral and Boundaries Commission. He said he will fix the judiciary once he wins the coming elections because it ruled against him.

The move to nullify Kenya’s election was unprecedented in Africa. It renewed hope for Mr. Odinga, who had alleged ballot tampering after the results of the August 8 vote were released. A longtime opposition candidate and the son of Kenya’s first vice president, Mr. Odinga unsuccessfully challenged the results of the 2013 vote that Kenyatta won.

Kenya braced for protests before the ruling, with police deployed to parts of the capital, Nairobi, and streets near the court were barricaded. Human rights groups have said that police killed at least 24 people in unrest after the election.

If a fresh election yields a victory for Mr. Odinga, Mr. Kenyatta, son of Jomo Kenyatta, Kenya’s first president, would become the first Kenyan president not to win re-election.

Those who spend time in Kenya during election season, as Real Truth staff did just prior to 2007’s tumultuous ballots, quickly gain an understanding of the sharp divisions between supporters of the presidential candidates.

Above and beyond party affiliations and political ideologies or platforms, the ethnic backgrounds of those running for office there are a major factor among the electorate. Mr. Odinga, from the Luo tribe, garners majority support among Luo Kenyans. Mr. Kenyatta holds similar sway among the Kikuyu community.

Since Kenya gained independence in 1963, allegations of favoritism of one’s own tribe, and suppression of other ethnic groups, have dogged politicians from prime ministers to local officials. Allegations of electoral irregularities can ignite high levels of tensions in city slums, typically segregated into tribal sections, but in which rival factions are jammed side-by-side in extremely difficult living conditions.

The weeks ahead are sure to be monitored closely by many nations. Following the Supreme Court decision, U.S. Ambassador to Kenya Robert F. Godec released a statement in favor of a new election, which began: “As a long-time friend, the United States continues to follow closely Kenya’s presidential election process. We welcome the decision by Kenya’s opposition alliance, NASA [National Super Alliance], to go to the Supreme Court with its concerns regarding the results of the presidential poll. The Supreme Court is the constitutional venue to address disputes. We look forward to the court resolving the questions NASA has raised in accordance with the rule of law and in the light of the evidence.”