This website requires the use of Javascript to function correctly. Performance and usage will suffer if it remains disabled.
How to Enable Javascript
North Korea Claims Latest Test Was an H-bomb 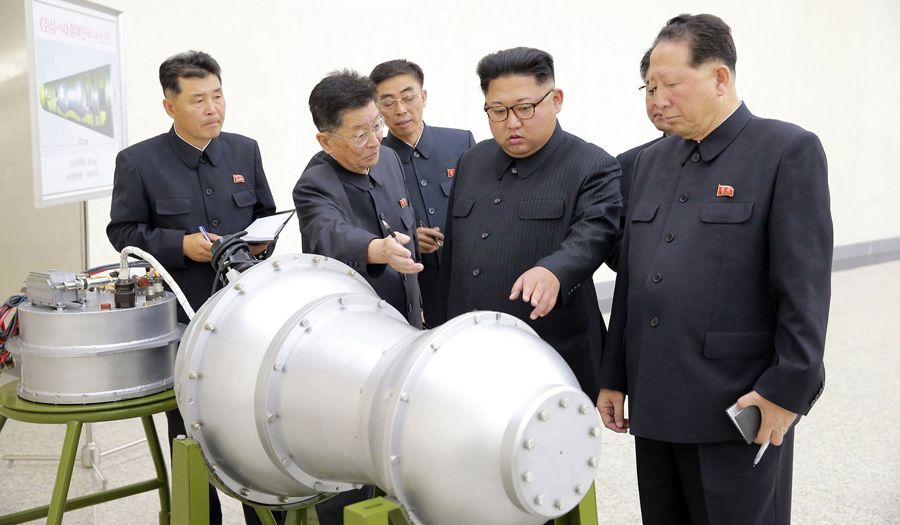 SEOUL, South Korea – North Korea said it triggered a hydrogen bomb Sunday in its sixth nuclear test, which judging by the earthquake it set off appeared to be its most powerful explosion yet.

South Korea’s weather agency estimated the nuclear blast yield of the presumed test was between 50 and 60 kilotons, or five to six times stronger than North Korea’s fifth test that took place in September 2016. That would mark a significant step forward in the North’s quest for a viable nuclear missile capable of striking anywhere in the United States.

On North Korean television, a newsreader called the test a “complete success” and said the “two-stage thermonuclear weapon” had “unprecedented” strength. Hours earlier, Pyongyang claimed its leader had inspected a hydrogen bomb meant for a new intercontinental ballistic missile.

Seoul’s weather agency and the Joint Chiefs of Staff said an artificial 5.7 magnitude quake occurred at 12:29 p.m. local time, in Kilju, northern Hamgyong province, the site where North Korea has conducted nuclear tests in the past. Seoul officials revised their earlier estimate of 5.6 magnitude quake. The U.S. Geological Survey called the first quake an explosion with a magnitude 6.3.

South Korea’s presidential office said it will hold a National Security Council meeting chaired by President Moon Jae-in. South Korea’s military said it has strengthened its monitoring and readiness while mulling a variety of possible responses that could be executed in collaboration with the U.S.

North Korea conducted two nuclear tests last year, the last nearly a year ago, on the September 9 anniversary of the nation’s founding. It has since maintained a torrid pace in weapons tests, including its first two intercontinental ballistic missiles test in July. Last month, North Korea fired a potentially nuclear-capable midrange missile over northern Japan.

Earlier Sunday, photos released by the North Korean government showed leader Kim Jung Un talking with his lieutenants as he observed a silver, peanut-shaped device that was apparently the purported thermonuclear weapon destined for an ICBM. What appeared to be the nose cone of a missile could also be seen near the alleged bomb in one picture, which could not be independently verified and was taken without outside journalists present. Another photo showed a diagram on the wall behind Mr. Kim of a bomb mounted inside a cone.

State media said Mr. Kim visited the Nuclear Weapons Institute and inspected a “homemade” H-bomb with “super explosive power” that “is adjustable from tens [of] kiloton to hundreds [of] kiloton.”

North Korea’s nuclear and missile program has made huge strides since Mr. Kim rose to power following his father’s death in late 2011. The North followed its two tests of Hwasong-14 ICBMs by threatening in August to launch a salvo of its Hwasong-12 intermediate range missiles toward the U.S. Pacific island territory of Guam.

Last week, North Korea flew a Hwasong-12 over northern Japan, the first such overflight by a missile capable of carrying nukes, in a launch Mr. Kim described as a “meaningful prelude” to containing Guam, the home of major U.S. military facilities, and more ballistic missile tests targeting the Pacific.

It may be difficult for outside experts to confirm that the nuclear device detonated Sunday was an H-bomb. State media reported that the test left no trace of radioactive material. The U.S. and its allies have made attempts to detect blast material to gauge North Korea’s progress, but Pyongyang has become better at containing it as its nuclear program has evolved.

To back up its claims to nuclear mastery, such tests are vital. The first of its two atomic tests last year involved what Pyongyang claimed was a sophisticated hydrogen bomb; the second it said was its most powerful atomic detonation ever.

It is almost impossible to independently confirm North Korean statements about its highly secret weapons program. South Korean government officials said the estimated explosive yield of last year’s first test was much smaller than what even a failed hydrogen bomb detonation would produce. There was speculation that North Korea might have detonated a boosted fission bomb, a weapon considered halfway between an atomic bomb and an H-bomb.

It is clear, however, that each new missile and nuclear test gives the North invaluable information that allows big jumps in capability. A key question is how far North Korea has gotten in efforts to consistently shrink down nuclear warheads so they can fit on long-range missiles.

North Korea is thought to have a growing arsenal of nuclear bombs and has spent decades trying to perfect a multistage, long-range missile to eventually carry smaller versions of those bombs.

South Korea’s main spy agency has previously asserted that it does not think Pyongyang currently has the ability to develop miniaturized nuclear weapons that can be mounted on long-range ballistic missiles. Some experts disagree.

The White House said President Donald Trump spoke with Prime Minister Shinzo Abe of Japan regarding “ongoing efforts to maximize pressure on North Korea.” The statement did not say whether the conversation came before or after the North’s latest claim.

The North said in its statement Sunday that its H-bomb “is a multi-functional thermonuclear nuke with great destructive power which can be detonated even at high altitudes for super-powerful EMP (electromagnetic pulse) attack according to strategic goals.”

Mr. Kim, according to the statement carried by the state-run Korean Central News Agency, claimed that “all components of the H-bomb were homemade…thus enabling the country to produce powerful nuclear weapons as many as it wants.”

In what could be read as a veiled warning of more nuclear tests, Mr. Kim underlined the need for scientists to “dynamically conduct the campaign for successfully concluding the final-stage research and development for perfecting the state nuclear force” and “set forth tasks to be fulfilled in the research into nukes.”

The two Koreas have shared the world’s most heavily fortified border since their war in the early 1950s ended with an armistice, not a peace treaty. About 28,500 American troops are deployed in South Korea as a deterrence against North Korea.

For more information on why North Korea has remained a thorn in the world’s side for decades read “The Korea Conundrum.”