This website requires the use of Javascript to function correctly. Performance and usage will suffer if it remains disabled.
How to Enable Javascript
Pope, Orthodox Leader Collaborate on Statement on the Environment

Pope, Orthodox Leader Collaborate on Statement on the Environment 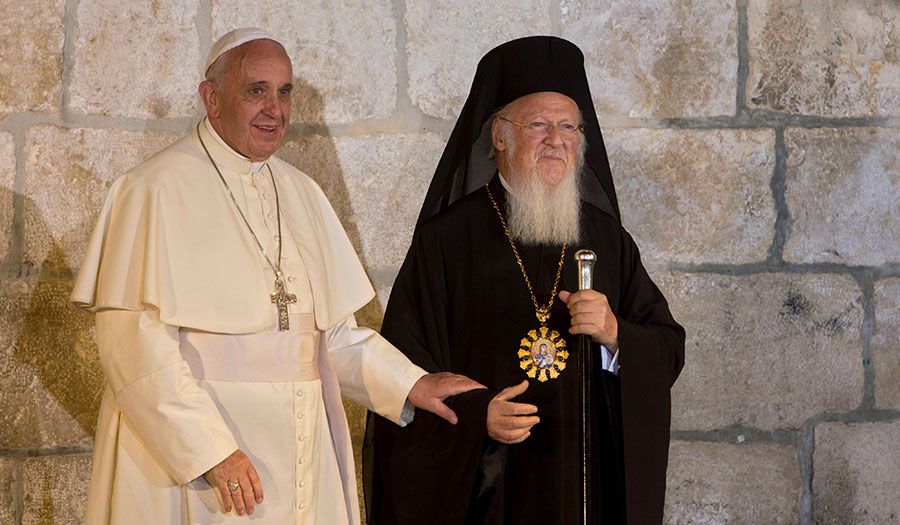 Working together: Pope Francis and Ecumenical Patriarch Bartholomew I, stand before the Church of the Holy Sepulcher in Jerusalem (May 25, 2014).

VATICAN CITY – Pope Francis and Orthodox Patriarch Bartholomew I called for urgent action to “heal our wounded creation,” warning that generations to come will suffer unless concrete and collective action is taken.

In their message, Francis and the Orthodox leader blasted the “alternative worldview” that considers nature as a private possession to be exploited, regardless of the cost.

“We urgently appeal to those in positions of social and economic, as well as political and cultural, responsibility to hear the cry of the Earth and to attend to the needs of the marginalized, but above all to respond to the plea of millions and support the consensus of the world for the healing of our wounded creation,” they wrote.

This unusual step follows numerous recent examples of ecumenical cooperation between the two denominations, which split nearly 1,000 years ago.

February 2016 saw the historic first meeting of a pope with an Orthodox patriarch (Kirill I of Moscow). Describing that event, Francis stated, “We spoke as brothers…we have the same baptism” (Catholic News Agency).

The new message on the environment echoed a 2015 encyclical from Francis, in which he cited writings by Bartholomew, long a proponent of environmental causes.

Watch for further developments that will greatly accelerate unity between the Catholic Church and other denominations.