This website requires the use of Javascript to function correctly. Performance and usage will suffer if it remains disabled.
How to Enable Javascript
Death Toll Nears 1,000 in South Asia’s Annual Monsoon Floods 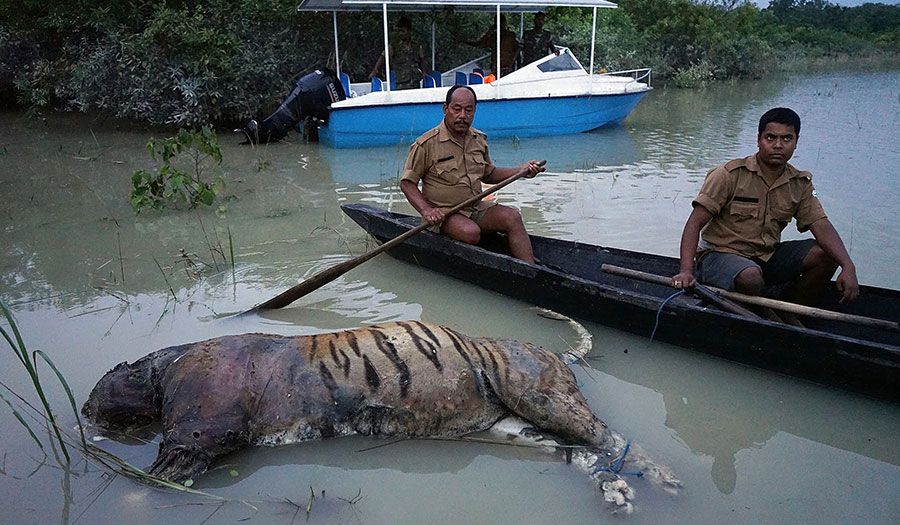 AP Photo/Uttam Saikia
Inundated: The carcass of a tiger lies in floodwaters at the Bagori Range inside Kaziranga National Park in the northeastern Indian state of Assam (Aug. 18, 2017).

The rains have led to wide-scale flooding in a broad arc stretching across the Himalayan foothills in the three countries, causing landslides, damaging roads and electric towers, and washing away tens of thousands of homes and crops.

The northern Indian states of Bihar, Uttar Pradesh, West Bengal, and Assam in the remote northeast are the worst hit, accounting for 680 deaths, most of them from drowning, snake bites, or landslides.

Disaster management authorities in Bihar said the state’s death toll of 367 could go up further as floodwaters recede and bodies are recovered from submerged houses.

Army soldiers and volunteers have evacuated around 770,000 people from inundated areas. Of these, some 425,000 were living in 1,360 relief camps set up in school and government buildings, said Avinash Kumar, a Bihar state official.

In neighboring Uttar Pradesh, the state government said around 2.3 million people in 25 districts have been affected by the floods when at least three major rivers overflowed their banks, entering fields and homes.

An Uttar Pradesh government spokesman blamed the unprecedented flooding on the release of water from dams in upstream Nepal.

“Rains have been intense but the release of water from Nepal has aggravated the situation,” said Manish Sharma.

Army troops have been helping to evacuate people marooned on rooftops or trees, while air force helicopters dropped packets of food, drinking water, and medicines to those camping on higher ground, mostly along highways.

In the eastern state of West Bengal, the top elected official, Chief Minister Mamata Banerjee, said 152 people had died and 15 million had been affected by floods in the past few weeks.

Another 71 people were killed in Assam as rivers breached their banks and entered low-lying villages. At the renowned Kaziranga National Park, officials said around 300 animals, including around two dozen rhinos and a Royal Bengal tiger, have been killed after floodwaters submerged nearly 80 percent of the wildlife park.

In neighboring Bangladesh, the death toll climbed to 132 while some 7.5 million people have been affected in this year’s floods, according to the Disaster Management Ministry.

The U.N. World Food Program said that Bangladesh was at risk of “devastating hunger” after major floods destroyed crops, homes and livelihoods of people across many impoverished areas in a delta nation of 160 million people.

“Many flood survivors have lost everything: their homes, their possessions, their crops,” Christa Rader, WFP’s Bangladesh country director, said in a statement. “People need food right now, and the full impact on longer-term food security threatens to be devastating.”

The death toll from the floods in Nepal stood at 146, with about 30 missing.