This website requires the use of Javascript to function correctly. Performance and usage will suffer if it remains disabled.
How to Enable Javascript
President Trump Visits Ohio to “Speak Straight to the American People” 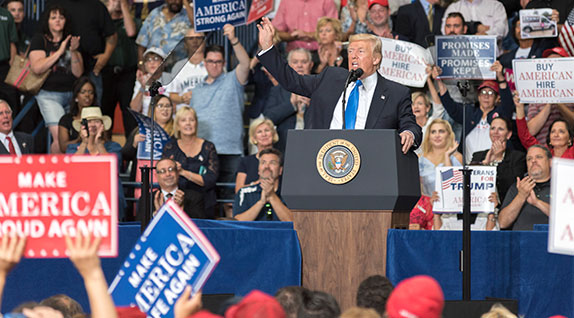 Samuel C. Baxter/The Real Truth
Rally in the Valley: United States President Donald Trump addresses a rally at the Covelli Centre in Youngstown, Ohio (July 25, 2017). The event, which was interrupted a few times by protesters, demonstrated a significant distrust among Trump supporters of Washington politicians and the mainstream media.

YOUNGSTOWN, Ohio – President Donald Trump’s July 25 visit to the Covelli Centre, named the “Rally in the Valley” for the Mahoning River Valley in which the city is situated, was yet another example of the deep political divide in the United States. Over 15,000 attended the event and overflow areas were set up where the event was televised live.

Mr. Trump began by outlining recent accomplishments including christening a new aircraft carrier and the Senate’s approval to begin repealing and replacing the Affordable Care Act by a tight, 51-50 margin.

“And now tonight, I’m back in the center of the American heartland, far away from the Washington swamp, to spend time with thousands of true American patriots,” he stated in the arena. The crowd chanted, “Drain the swamp,” during which the president turned toward the audience behind him while smiling and waving.

Stark political divisions punctuated the event, namely between supporters of Mr. Trump and the news media. Vitriol toward the press boiled over when Mr. Trump called out the media for being “dishonest” and “fake.”

“I’m here this evening to cut through the fake news filter, and to speak straight to the American people,” he said.

This prompted the crowd to turn to the press area and jeer while pointing their fingers and shouting insults.

Before the rally, many attendees told The Real Truth of their distrust of both the mainstream media and elected officials. They see the president as someone who can circumvent what are seen as broken systems and effect real change.

A 45-year-old Pittsburgh resident, who previously voted for Democrats, explained why he backs Mr. Trump: “He’s not a Republican, he’s not a Democrat. He ran against everybody, this whole establishment. I’ve never seen anybody that actually delivered on their promises.”

Despite a tumultuous start to Mr. Trump’s presidency, he appears to still have the trust of those who voted for him.