This website requires the use of Javascript to function correctly. Performance and usage will suffer if it remains disabled.
How to Enable Javascript
UN: Declining Pollinators Could Lead to Human Malnutrition

A steady decline in pollinating animals, including bees, butterflies and bats, could lead to increasing human malnutrition, scientists estimate.

According to the United Nations, two of every five invertebrate pollinators such as bees and butterflies are headed toward extinction. Since pollinators are responsible for 35 percent of global crop production, scientists estimate that if all pollinators were to disappear, more than one million additional people would die from disease and malnutrition yearly.

A report from the Center for Biological Diversity revealed that more than 700 North American bee species are headed toward extinction. According to study author Kelsey Kopec, “We’re on the verge of losing hundreds of native bee species in the United States if we don’t act to save them.”

Bees pollinate 70 percent of the food we eat, and help produce over $10 billion of crops annually in the U.S.

A 2015 United Nations report found that 37 percent of bee species in Northwest Europe and North America are declining. A similar phenomenon is occurring in several other places around the world. 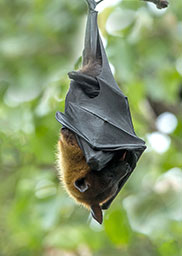 According to the National Wildlife Health Center, “In temperate regions, bats are primary consumers of insects, and a recent economic analysis indicated that insect suppression services (ecosystem services) provided by bats to U.S. agriculture is valued between 4 to 50 billion dollars per year.”

Since the winter of 2007-2008, however, millions of bats have died from white-nose syndrome (WNS). WNS has resulted in an 80 percent decline of northeastern U.S. bats, and spread to other parts of the country in 2016. The U.S. Geological Survey reported that bat populations affected by WNS will not increase until 2023.

Various species of butterflies have also been in decline around the world. In North America, the number of monarch butterflies fell 68 percent from 1994 to 2016. The European Environment Agency (EEA) noted a 50 percent decline of grassland butterflies over the past two decades due to mismanagement of the ecosystem.

According to the executive director of the EEA, “If we fail to maintain these habitats we could lose many of these species forever…the pollination they carry out is essential for both natural ecosystems and agriculture.”