This website requires the use of Javascript to function correctly. Performance and usage will suffer if it remains disabled.
How to Enable Javascript
HPV: Nearly One in Two U.S. Adults Infected 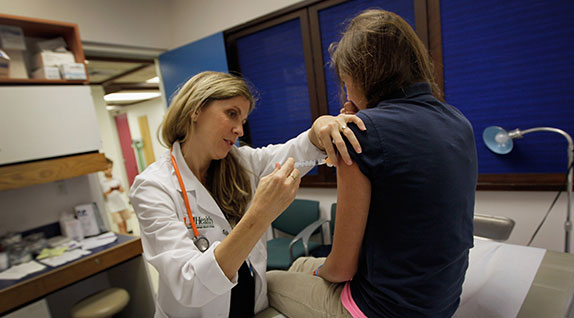 Joe Raedle/Getty Images
Vaccination: A pediatrician gives an HPV vaccination to a 13-year-old girl in her office (Sept. 11, 2011).

A report published by the National Center for Health Statistics found that over 42 percent of Americans between the ages of 18 and 59 have human papillomavirus (HPV).

The sexually transmitted disease consists of more than 150 related viruses, which may cause a range of symptoms from genital warts to cervical cancer in women and other HPV-related cancers in both men and women. However, most cases of the virus do not cause symptoms.

Cancer-causing strains of HPV, which account for 31,000 cases of cancer each year, currently affect 25 percent of men and 20 percent of women in the U.S., according to the report.

The STD has become widespread because many people do not know they have it. A fact sheet by the Centers for Disease Control and Prevention stated: “Since HPV causes no symptoms, most men and women can get HPV—and pass it on—without realizing it. People can have HPV even if years have passed since they had sex.”

Adults are not routinely screened for HPV infections. Dr. Geraldine McQuillan, lead author of the report from the National Center for Health Statistics, stated to The New York Times, “One of the most striking things that we really want people to know is that high-risk HPV is common—common in the general population.”