This website requires the use of Javascript to function correctly. Performance and usage will suffer if it remains disabled.
How to Enable Javascript
Chile Suffers Worst Wildfires in History 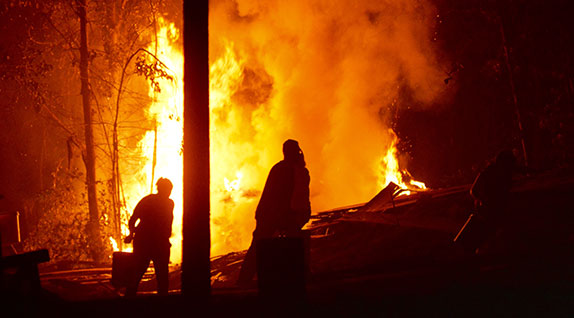 At least 11 people were killed, thousands left homeless, and entire villages destroyed after the most destructive wildfires in Chile’s history tore through the center of the country in January. At their peak, the more than 130 separate fires encompassed an area three times the size of New York City.

In one town, 1,000 homes were burned during the latest incident.

Unseasonably high temperatures, windy conditions, and an ongoing drought in the area stymied efforts to stop the fires.

The most recent blazes have not only prompted at least 13 nations to send humanitarian assistance, but they have also affected the local economy.

“Felipe Neira, president of Itata Valley winemakers association, said in a telephone interview that the industry, which is mostly concentrated in central Chile, so far had lost about 100 acres of vineyards to the fires but that 1,250 acres were in jeopardy,” according to The Los Angeles Times.

“Our wine heritage is burning up,” Mr. Neira said.

In addition, the timber industry has been affected.

“Over 40,000 hectares of the impacted land is used by forestry companies who feed the wood, pulp and paper industry, Chile’s second-largest export industry after copper,” Reuters reported. “There are a total of some 2.4 million hectares of plantations in the nation.”

“It is still not possible to determine the economic damage caused by these fires, as they have destroyed woods in different stages of growth and forestry management, and there has also been loss of infrastructure and installations,” industry group CORMA told the news outlet.