This website requires the use of Javascript to function correctly. Performance and usage will suffer if it remains disabled.
How to Enable Javascript
South China Sea Economies Threatened by Overfishing 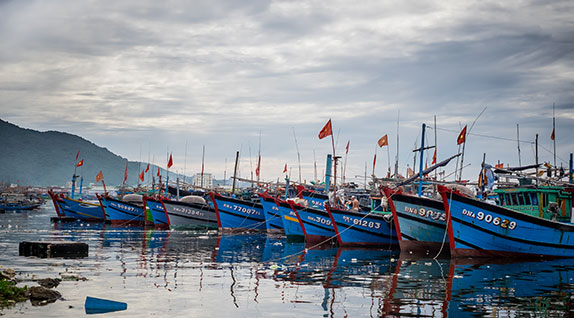 Linh Pham/Getty Images
Territorial dispute: Newly built fishing boats are stationed at the Thuan Phuoc port in Danang, Vietnam, in the South China Sea (Aug. 30, 2016). The nation has strengthened its fishing fleet in the area amid a dispute with China over ownership of the waters.

Excessive fishing and competition for resources in the South China Sea threatens to hurt the surrounding cultures and economies relying on them.

National Geographic reported: “This is one of the world’s most important fisheries, employing more than 3.7 million people and bringing in billions of dollars every year. But after decades of free-for-all fishing, dwindling stocks now threaten both the food security and economic growth of the rapidly developing nations that draw on them.”

The sea, which encompasses 1.4 million square miles and supports $5.3 trillion of international trade annually, helps supply jobs and livelihoods to those in 10 countries and territories surrounding it, including Vietnam, Malaysia and the Philippines.

Yet China controversially claims control over its waters, arguing that it historically possessed them. Beijing has encouraged Chinese fishermen to work in highly contested areas, which has spurred greater competition among local fishermen. This “extra pressure has sped up the depletion of fish stocks,” National Geographic continued.

Marine biologist John McManus, a professor at the Rosenstiel School of the University of Miami, stated: “What we’re looking at is potentially one of the world’s worst fisheries collapses ever. We’re talking hundreds and hundreds of species that will collapse, and they’ll collapse relatively quickly, one after another.”