This website requires the use of Javascript to function correctly. Performance and usage will suffer if it remains disabled.
How to Enable Javascript
Ash Tree Will Be “Wiped Out” in Europe, Journal Reports

Ash Tree Will Be “Wiped Out” in Europe, Journal Reports 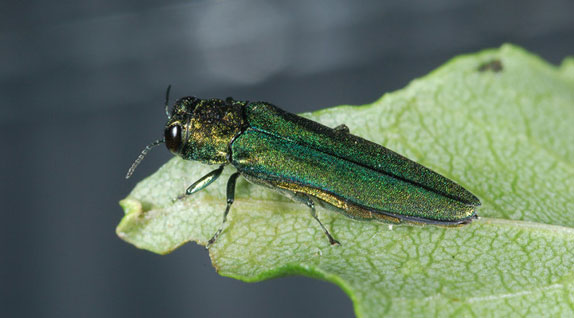 U.S. Department of Agriculture, CC by 2.0

Europe’s ash trees have the potential to be destroyed as a result of the fungal disease ash-dieback, as well as an invasive beetle, according to a review published in the Journal of Ecology.

Trees that are infected by ash-dieback, also known Chalara, do not recover. The infection begins in the leaves and spreads throughout the branches before consuming the entire organism.

The fungus appeared in Europe in 1992 and spread to the United Kingdom in 2012. Up to 90 percent of Denmark’s ash trees have been infected, and, according to author of the review Dr. Peter Thomas, 95 percent of the UK’s ash trees are at risk. Over 100,000 have already been destroyed in Northern Ireland as a result of the disease.

The emerald ash borer is also threatening to consume the Continent’s ash trees. The bright green beetles, which give birth to larvae that bore under the trees’ bark, are spreading west from Russia at a rate of 25 miles per year and are believed to have reached Sweden. Dr. Thomas stated that “between the fungal disease ash dieback and…the emerald ash borer, it is likely that almost all ash trees in Europe will be wiped out—just as the elm was largely eliminated by Dutch elm disease [in the 1980s].”

The environmental and aesthetic impact of a mass ash tree die-off would be dramatic. Dr. Thomas reported that “over 100 species of lichens, fungi and insects are dependent upon the ash tree and are likely to decline or become extinct if the ash was gone.”

“Some other trees such as alder, small-leaved lime and rowan can provide homes for some of these species…but if the ash went, the British countryside would never look the same again.”