This website requires the use of Javascript to function correctly. Performance and usage will suffer if it remains disabled.
How to Enable Javascript
Global Coral Bleaching Could Impact 500 Million People

The period of coral bleaching that began in October 2015, the longest and most widespread such event recorded in history, is expected to continue well into 2017, the United States National Oceanic and Atmospheric Association (NOAA) reported. The resultant coral die-off could impact up to half a billion people and threaten the $29.8 billion that reefs provide to world economies each year. Authorities point to El Niño weather patterns and rising ocean temperatures as the cause.

“Many hundreds of millions of people are dependent in some way on the goods and services provided by coral reefs, with over 100 million directly dependent on coral reefs for their survival,” think tank Reef Resilience explained on its website. For example, “In developing countries, coral reefs contribute about one-quarter of the total fish catch, providing food to an estimated one billion people in Asia alone.”

Although coral reefs cover less than one-tenth of a percent of the ocean floor, they support about one-quarter of all marine life. According to the United Nations Environmental Program, one square mile of coral can produce 45 tons of fish and other seafood each year.

Sometimes called “the rainforests of the sea,” coral reefs buffer the coastline from pounding waves. The loss of protection by them could expose coastal cities to the full impact of waves from tropical storms.

Scientists have even tapped the rich biodiversity of coral reefs to treat cancer, HIV, cardiovascular diseases, ulcers and other illnesses.

Bleaching primarily occurs when corals are stressed by warmer water temperatures, pollution and overfishing. As a result, the corals expel symbiotic algae, called zooxanthellae, which live on their exoskeletons and provide food.

The algae also contribute to the coral’s vibrant color. The rejection of the algae starves the coral of nutrients, which changes the coral’s color to white. After prolonged starvation, the coral dies.

The Great Barrier Reef has been significantly impacted by the global event: 93 percent of the famous 1,500-mile coral stretch has suffered damage, according to aerial surveys by Australia’s National Coral Bleaching Taskforce. 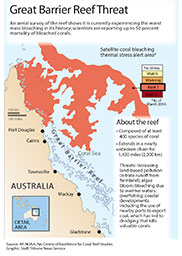 Professor Terry Hughes, who worked with the taskforce, told the Australian Broadcasting Corporation: “We’ve never seen bleaching on the Great Barrier Reef of that severity and when bleaching is that strong it affects virtually all coral species.”

The current bleaching continues a worsening trend. In 1998, 42 percent of the reef was damaged by bleaching. In 2002, it occurred again, affecting 54 percent of the underwater ecology.

The most recent event, however, has caused the most damage to date—four times worse than the last one, according to scientists.

Though a certain percentage of the reefs are expected to come back to life within a year, some stretches suffered “extreme” damage. In a 600-mile stretch spanning from Port Douglas to Australia’s northeast tip, 50 percent of the bleached corals are expected to die.

According to Andrew Baird, a professor from James Cook University, “At some reefs, the final death toll is likely to exceed 90 per cent. When bleaching is this severe it affects almost all coral species, including old, slow-growing corals that once lost will take decades or longer to return.”

Regarding the global forecast of the current bleaching, Coral Reef Watch, a satellite service of NOAA, reported on its website that this problem may last longer than expected, and some damage could be permanent.

“Coral-threatening conditions are expected to continue and spread to new areas for the rest of the year and possibly into 2017. Parts of some reefs are likely to be wiped out. Others will be so damaged that they won’t recover for decades, if ever.”