This website requires the use of Javascript to function correctly. Performance and usage will suffer if it remains disabled.
How to Enable Javascript
China-U.S. Tensions Mount over South China Sea 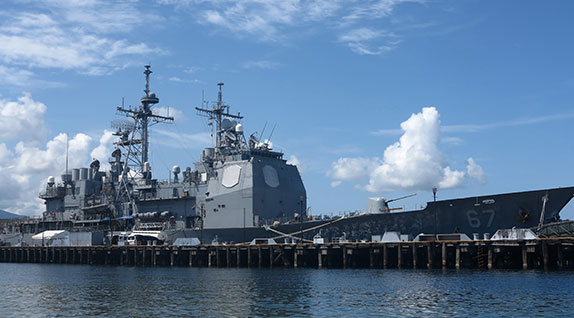 Robert Gonzaga/AFP/Getty Images
Contested territory: The cruiser USS Shiloh is moored at Subic Bay, a former U.S. naval base in the Philippines, amid rising tensions over China’s militarization in areas of the sea that are also claimed by neighboring nations (May 30, 2015).

Sino-U.S. relations received a blow after Washington cut an agreement with the Philippines that will allow America to station soldiers at Philippine bases in the highly disputed South China Sea.

Chinese Foreign Ministry spokesperson Hua Chunying called the deployment of U.S. troops “harmful” to regional stability, and considered it an effort to counter China’s territorial claims over the sea. He stated during a media briefing: “The U.S. has talked about [our] militarization in the South China Sea. But can it explain whether its own increased military deployment in the region is equivalent to militarization?”

Washington said the buildup is intended to help maintain free passage of neutral trade and passenger ships, which has been threatened by China’s increasingly “assertive pursuit of territorial claims in the South China Sea, one of the world’s busiest trade routes,” Reuters reported.

Beijing lays claim on most of the sea’s waters, through which $5 trillion in trade value passes each year. Other neighbors, including Malaysia, the Philippines, Taiwan and Vietnam, often claim overlapping territory, which has led to several standoffs and Chinese military buildup in recent years.

“State Department spokesman John Kirby, a retired two-star Navy admiral, said that the United States has ‘made absolutely no bones about the fact that we take the rebalance to the Asia Pacific region very seriously,’” The Washington Post reported. “But he added that there is ‘nothing offensive or provocative’ about any of the Pentagon’s deployment of troops to the region.”