This website requires the use of Javascript to function correctly. Performance and usage will suffer if it remains disabled.
How to Enable Javascript
NASA: Mediterranean Drought “Worst of Past 900 Years” 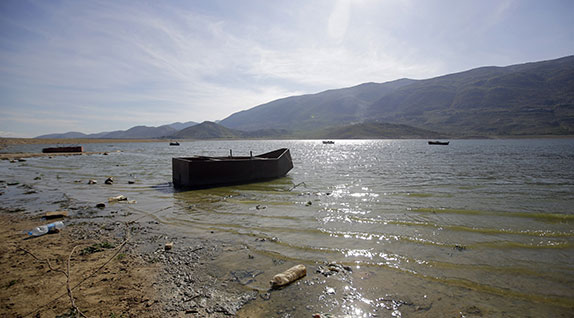 An 18-year drought in the eastern Mediterranean area has been measured by NASA as the region’s worst of the past nine centuries. This includes the nations of Cyprus, Israel, Jordan, Lebanon, Syria and Turkey.

Data on weather patterns from AD 1100 to 2012 was determined based on measurements of the thickness of tree rings in the area. Thicker rings indicated years of plentiful water supply, while thin rings revealed years of drought.

NASA reported on its website: “Between the years 1100 and 2012, the team found droughts in the tree-ring record that corresponded to those described in historical documents written at the time. According to [lead author of the study, Ben] Cook, the range of how extreme wet or dry periods were is quite broad, but the recent drought in the Levant region, from 1998 to 2012, stands out as about 50 percent drier than the driest period in the past 500 years, and 10 to 20 percent drier than the worst drought of the past 900 years.”

The current drought has been characterized by a yearly decrease in rainfall, with some years receiving only two-thirds of expected precipitation. This problem has been compounded by population growth and an improving quality of life in some cities, which has increased the demand for water per person.

Several bodies of water, including Israel’s Sea of Galilee, have been depleted to near-irreversible levels. Israel’s Water Authority spokesman, Uri Schor, said that water levels for several aquifers in Israel have “reached a certain point that we earned much less than what we spent.”

The World Resources Institute (WRI) estimated that the Mediterranean Levant area will become the most water stressed region in the world by 2040 should the current dry spell continue.

According to a 2015 report from WRI, this could have major political consequences for the region: “With regional violence and political turmoil [in the Middle East] commanding global attention, water may seem tangential. However, drought and water shortages in Syria likely contributed to the unrest that stoked the country’s 2011 civil war. Dwindling water resources and chronic mismanagement forced 1.5 million people, primarily farmers and herders, to lose their livelihoods and leave their land, move to urban areas, and magnify Syria’s general destabilization.”

In addition, the WRI reported: “Saudi Arabia’s government said its people will depend entirely on grain imports by 2016, a change from decades of growing all they need, due to fear of water-resource depletion. The U.S. National Intelligence Council wrote that water problems will put key North African and Middle Eastern countries at greater risk of instability and state failure and distract them from foreign policy engagements with the U.S.”

For more insight on drought and the developing global water scarcity crisis, read the article, Our Water Crisis – Reversing the Irreversible.