This website requires the use of Javascript to function correctly. Performance and usage will suffer if it remains disabled.
How to Enable Javascript
Decades of Extreme Weather Wiped Out One-tenth of World’s Cereal Crops 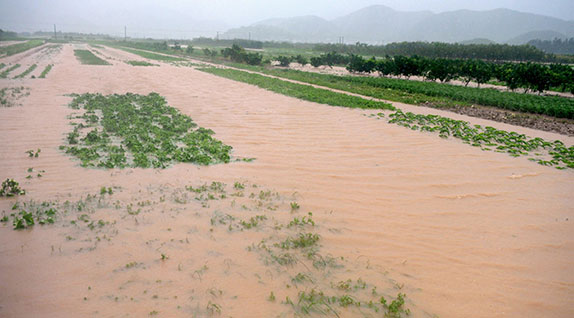 STR/AFP/Getty Images
Lost yield: A cornfield is submerged by floodwaters during a heavy storm brought by typhoon Chan-hom in Zhoushan, China (July 11, 2015).

Weather-related disasters, such as floods, famines, fires and storms, destroyed nearly 10 percent of the world’s rice, wheat, corn and other cereal crops between 1964 and 2007, according to a recent study led by University of British Columbia (UBC) and McGill University researchers. Droughts and heat waves, which caused the most damage, resulted in three billion tons of cereal production losses during that time.

The study, published in the journal Nature, found that the effects of dry spells on crops were greater in developed countries than developing countries. North America, Europe and Australia lost about 20 percent of its crop from droughts since 1964 while Asia lost 12 percent, Africa 9 percent, and Latin American nations experienced no significant effects.

“Across the breadbaskets of North America, the crops and methods of farming are very uniform across huge areas, so if a drought hits in a way that is damaging to those crops, they will all suffer,” first author Corey Lesk, a recent graduate of McGill’s Department of Geography, said in a UBC press release. “By contrast, in much of the developing world, crop systems are a patchwork of small fields with diverse crops. If a drought hits, some of those crops may be damaged, but others may survive.”

The study also revealed that the damage caused by drought doubled from 1985 to 2007.

Dr. Navin Ramankutty, an author of the report and geographer from UBC, told The New York Times: “We don’t think about it much, but rice, wheat and maize alone provide more than 50 percent of global calories. When these grain baskets are hit, it results in food price shocks, which leads to increasing hunger.”