This website requires the use of Javascript to function correctly. Performance and usage will suffer if it remains disabled.
How to Enable Javascript
The West’s Cooperation with Russia Raises Concerns 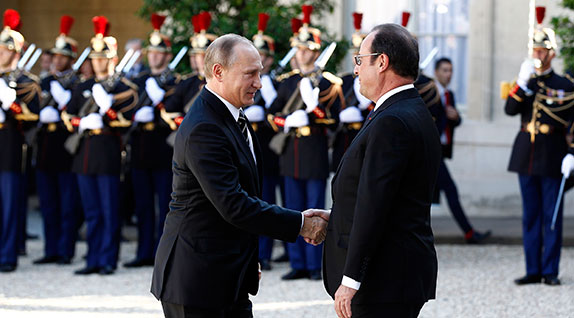 Eastern European nations—Bulgaria, Estonia, Hungary, Latvia, Poland, Romania, the Slovak Republic, and the Czech Republic—fear that growing diplomatic ties between Moscow and the West may threaten the safety of their borders.

“Leaders of the NATO alliance have also expressed concern at what they see as Moscow’s growing military presence from the Baltics to Syria, after Russia launched air strikes in support of President Bashar al-Assad…”

The nations are worried that Russia’s stronger Western ties could cause those countries to turn a blind eye if the Kremlin were to overrun their borders.

“Russia’s military activities in our neighbourhood are undermining European security architecture,” the leaders said in a joint statement at a meeting of the nine Eastern European countries.

Relations between the West and Russia have strengthened in recent years, but increasing military collaboration between the two against terrorist forces has brought them to a new level. This has been viewed by some as a move by President Vladimir Putin to “repair frayed relations with the West,” according to The New York Times.

Eastern Europe, however, interprets Mr. Putin’s actions as a step to persuade “the West to lift sanctions on his wobbly economy imposed because of the Ukraine dispute” (ibid.).

The sanctions were put into effect in February 2014 by the European Union and the United States in response to Russia’s military actions in the Ukraine.

In late January, European Union leaders will review the status of the sanctions. They will be dropped if all parties agree to it—an outcome many Eastern European leaders do not want.

Poland’s Prime Minister Beata Szydlo expressed fear that if the sanctions were dropped, Moscow would be able to better afford military campaigns in Eastern Europe.

Similarly, Estonian Prime Minister Taavi Roivas remarked in another Reuters article, “Cooperation elsewhere does not mean for Europe concessions in its neighborhood,” and urged the West to keep sanctions on Russia as long as it had a military presence in the Ukraine.

In addition to diplomatic and economic alignment, Moscow’s military buildup has mounted fears of a possible invasion. According to the nation’s news agency, TASS, Russia increased the number of contract servicemen from 230,000 in the spring of 2014 to 350,000 by November 2015, and the defense budget swelled from $25 billion to $28 billion during the same period.

The Council on Foreign Relations said that this show of force is a clear sign “that President Vladimir Putin is prepared to use military might to reestablish Russian hegemony in its near abroad.”

Despite this, Mr. Putin senses that the West is more interested in working with the Kremlin than harboring Cold War tensions.

“Geopolitically, Russia has a great opportunity to play a geopolitics game and come out of isolation,” Laurynas Kasciunas, head of Eastern Europe Studies Centre, told Reuters. “A great challenge to European unity is ahead of us.”