This website requires the use of Javascript to function correctly. Performance and usage will suffer if it remains disabled.
How to Enable Javascript
Pope Benedict to Resign 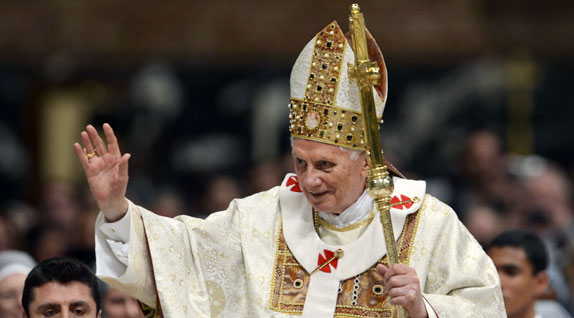 Andreas Solaro/AFP/Getty Images
Stepping down: Pope Benedict XVI waves to parishioners after a mass at St. Peter's Basilica at the Vatican, just days before announcing his retirement (Feb. 2, 2013).

Pope Benedict XVI announced his resignation as the head of the Catholic Church, effective February 28 of this year. While not unprecedented, Benedict is the first pope to resign in nearly 600 years.

Benedict explained his reasons for stepping down in a letter posted on the Vatican’s website. In order to fulfill the duties of the papal office, he said, “strength of mind and body are necessary, strength which in the last few months has deteriorated in me to the extent that I have had to recognize my incapacity to adequately fulfill the ministry entrusted to me.”

The timing of the announcement shocked the world at large, including Italian Prime Minister Mario Monti, who described himself as being “greatly shaken by this unexpected news” (BBC News). Even the pope’s closest aides were described as “incredulous.”

The media has already begun speculating about who will fill his shoes.

“Analysts say Europeans—and Italian-speakers specifically—are still among the favourites, but strong candidates could emerge from Africa and Latin America, which both have very large Catholic populations” (ibid.).

A successor will likely be chosen by the end of March.