This website requires the use of Javascript to function correctly. Performance and usage will suffer if it remains disabled.
How to Enable Javascript
Deadly Kidney Disease Plagues Central Americans

Researchers are confounded by a kidney-failure disease striking Central American rural workers at alarming rates. According to PRI’s The World, chronic kidney disease (CKD) has reached epidemic levels among males, and spread to at least six Pacific-coast countries in Central America.

In Nicaragua, the disease is making a serious impact on the country’s male population. 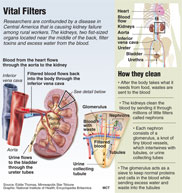 “Targeting scores of men working on the fields, it has surpassed HIV and diabetes combined as the biggest killer of males in the embattled Central American country,” a Reuters video report stated.

The International Consortium of Investigative Journalists said the disease is “the second leading cause of death for men” in El Salvador, while in Guanacaste, Costa Rica, “the regional hospital had to start a home dialysis program because it was overwhelmed with so many CKD victims that it began running out of beds to treat patients with other ailments.”

A team of researchers from the Boston University School of Public Health [BUSPH] is investigating possible causes for the terminal-disease outbreak, including exposure to dangerous chemicals and hours of strenuous work in extreme heat.

“The disease has, essentially, been a death sentence once you get it,” associate professor of epidemiology and BUSPH lead researcher Daniel Brooks stated in a Boston University release. “We don’t often have public health epidemics [where] we really have no idea what the cause is. In this case, that is the situation.”

PRI’s The World also quoted Mr. Brooks: “Day after day of hard manual labor in hot conditions—without sufficient replacement of fluids—could lead to effects on the kidney that are not obvious at first but over time accumulate to the point that it enters into a diseased state…This has never been so far shown to cause chronic kidney disease, so we would be talking about a new mechanism that has not so far been described in the scientific literature.”