This website requires the use of Javascript to function correctly. Performance and usage will suffer if it remains disabled.
How to Enable Javascript
Russia: Largest Protests in Two Decades 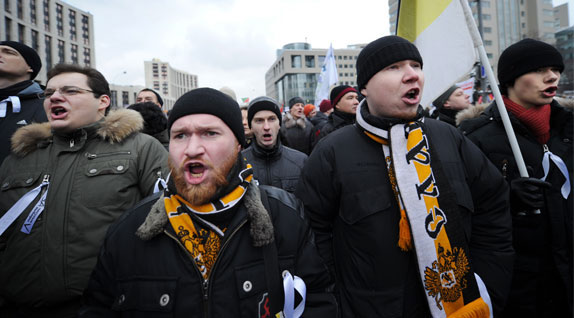 During the largest Russian protests since the Soviet Union’s fall 20 years ago, dissidents demanded Mr. Putin’s resignation and an election rerun.

“…protesters shouted ‘New Elections, New Elections,’ and organizers say their densely packed mass on Sakharov Avenue reached 100,000 people, which would exceed the numbers who showed up to protest at a similar rally in Moscow two weeks [prior],” Voice of America reported.

Of the same demonstration, The Associated Press stated: “The various liberal, nationalist and leftist groups that took part appear united only by their desire to see ‘Russia without Putin,’ a popular chant.”

Despite demonstrations and calls for Mr. Putin to step down by former Soviet leader Mikhail Gorbachev, the prime minister is expected to win the country’s March presidential election.

“Although his ratings have plummeted in Moscow and St. Petersburg, [Mr. Putin] remains extremely popular with ordinary Russians living in the provinces,” The Telegraph stated. “Opinion polls show he would comfortably win a presidential election if it was held tomorrow, albeit in the second round.”

Among his election proposals, Reuters reported that Mr. Putin “wants to bring ex-Soviet states into a ‘Eurasian Union.’” He also said he may be willing to allow the registration of small opposition parties, something currently prohibited. In addition, he said he plans to support Dmitry Medvedev for premier, which protesters claim disregards the democratic process.

A win by Mr. Putin could result in his maintaining power until 2024.

“It’s absolutely unacceptable that the man who’s in power [already] for 12 years will be here for 12 years more!” one demonstrator told NBC News. He later stated, “We don’t want another revolution, or bloodshed, but if Putin is going to win then there may be a ‘Russian Spring’—not an Arab Spring but a Russian one.”