This website requires the use of Javascript to function correctly. Performance and usage will suffer if it remains disabled.
How to Enable Javascript
Britain’s Homeless Youth Population Increases 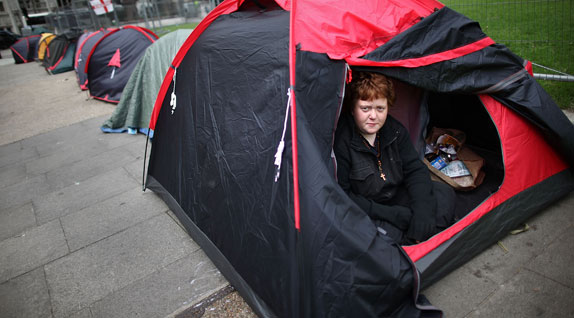 Peter Macdiarmid/Getty Images
On the street: A homeless teenager sits in her tent on the pavement in Parliament Square London, England (June 20, 2011).

Growing numbers of young people ages 16 to 24 are homeless according to a national British charity report.

Researchers from the organization, Homeless Link, found that almost half of the homeless-assistance institutions surveyed “have seen an increase in young people seeking help” due to “relationship breakdowns with family and friends,” according to the report “Young and Homeless.”

A 17-year-old girl told Sky News that she “counts herself lucky to have a part-time job, but has spent the past year sleeping rough [spending the night on the street] or borrowing friends’ sofas in southeast London.” She continued, “I wake up in the morning and I don’t know where I’m going to be staying next…I do feel ashamed that when people ask me whereabouts do you live, and I have to say I don’t.”

Paul Marriott, chief executive of the nation’s largest charity for homeless youth, Depaul UK, said in the Homeless Link release that the results “sadly come as no surprise…Depaul UK has begun to see a rise in rough sleeping among young people in some parts of the country and we expect this to continue to rise given the continuing squeeze on household income and public expenditure.”