This website requires the use of Javascript to function correctly. Performance and usage will suffer if it remains disabled.
How to Enable Javascript
Devastating 7.2 Earthquake Hits Turkey 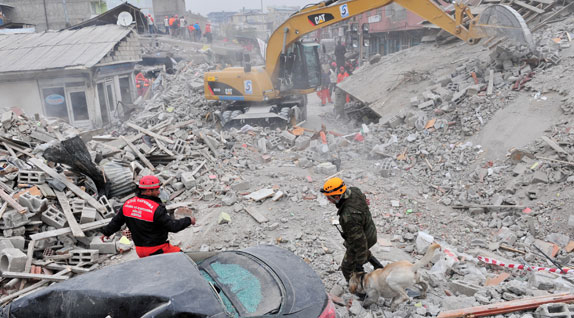 Mustafa Ozer/AFP/Getty Images
Rescue: A worker takes part in an operation to save people from a collapsed building following an earthquake in Van, Turkey (Oct. 25, 2011).

A powerful 7.2-magnitude earthquake—Turkey’s worst in a decade—killed more than 600 people and injured at least 4,100.

“We heard cries and groaning from underneath the debris, we are waiting for the rescue teams to arrive,” a survivor told Reuters “as he stood beside the ruins of [a] building that had collapsed before his eyes.” 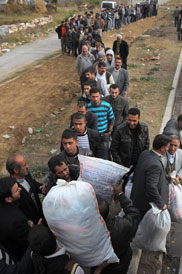 The earthquake toppled approximately 3,700 buildings, and left debris piles from multiple-story structures strewn across the area.

“At one of these, firefighters from the south-eastern city of Diyarbakir tried to reach four children believed trapped deep inside the remains of an apartment block,” Guardian reported. “At another site, onlookers watched as rescuers tried to calm a 10-year-old boy whom they were attempting to free from beneath a concrete slab.”

More than 500 aftershocks have exacerbated the situation and hindered rescue efforts.

“Authorities have warned survivors in the mainly Kurdish area not to enter damaged buildings and thousands were preparing to spend a third night outdoors, in cars or tents,” CBS News reported. “Temperatures at night have been close to freezing.”

Authorities expect the number of casualties to rise in the country’s hard-hit eastern region, in part, due to the cold temperatures.

“Hypothermia is an added risk to those trapped in debris and those left homeless following the 7.2-magnitude quake,” Accuweather reported.