This website requires the use of Javascript to function correctly. Performance and usage will suffer if it remains disabled.
How to Enable Javascript
Earthquakes Rattle U.S. 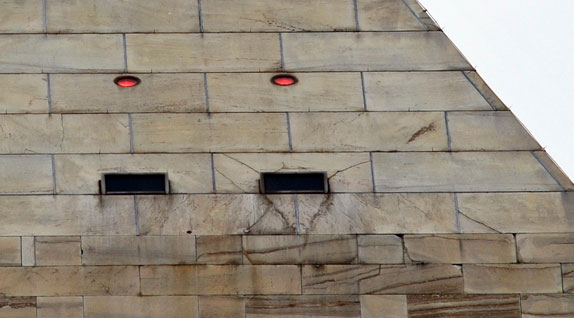 Mandel Ngan/AFP/Getty Images
Damaged: A crack shows on the top west face of the Washington Monument after an earthquake struck the region (Aug. 25, 2011).

Two strong earthquakes rocked the Western, Midwestern and Eastern regions of the United States during one week in August. The shaking caused injuries, damaged buildings—including large cracks in the Washington Monument and broken spires on the National Cathedral—prompted the evacuation of hundreds of thousands of people, and halted operations at a nuclear facility for fear of a meltdown. Both tremors were followed by less intense aftershocks.

“It was felt as far away as Greeley, about 350 miles north, and into Kansas and New Mexico…” a National Earthquake Information Center geophysicist told The New York Times.

The newspaper added, “She said that while Colorado had experienced several earthquakes close to [this earthquake’s] size in recent decades—a magnitude 5.3 near Denver in 1967 and a magnitude 5.7 in the state’s northwest corner in 1973—both of those quakes were ultimately determined to have been caused by human activity, from explosives or drilling.”

The following day, a rare magnitude-5.8 earthquake with its epicenter in central Virginia shook the Eastern seaboard from Georgia to Canada.

“It sounded like a train running under our feet and an airplane landing on the roof at the same time,” a Virginian described in a Washington Post letter-to-the-editor.

Analysts consider both of the quakes a “wake-up call” as the event exposed the area’s level of unpreparedness for a major disaster.

“Immediately after [the] temblor, panic, rather than considered action, was widespread,” CNN stated. “Not knowing what to do, tens of thousands of people fled buildings (or were ordered to evacuate) and ended up packing downtown sidewalks and even spilling into the streets…Even in big quakes, it is generally safer to ride out the shaking inside, rather than running outside, where there’s the potential of being hit by falling shards of glass and building debris.”

At the earthquake’s epicenter in Mineral, Virginia, officials estimate the tremor caused approximately $17.5 million in damages.

About 10 miles from the tremor’s source, the North Anna nuclear power plant, which had earthquake sensors removed in the 1990s due to budget cuts, “shut down automatically…after it lost off-site power for seven hours,” USA Today reported. “During that time, backup diesel generators kicked in to keep the radioactive core cool.” One of the four plant reactors failed, and authorities are concerned that broken underground pipes could leak radioactive material into groundwater.

According to the U.S. Geological Survey, the Central Virginia Seismic Zone has had a track record of several small to moderate earthquakes since the 1800s, but this was the region’s largest quake in more than a century.