This website requires the use of Javascript to function correctly. Performance and usage will suffer if it remains disabled.
How to Enable Javascript
U.S. Wildfire Chars More Than 500,000 Acres 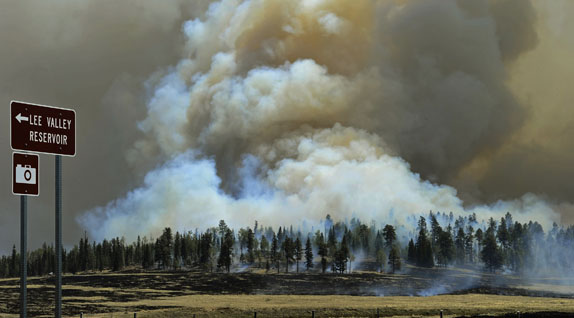 Ablaze: Smoke rises in the Apache National Forest as the Wallow Fire continues to burn in Big Lake, Arizona (June 12, 2011).

Arizona’s “Wallow Fire”—the largest in the state’s history—raged over 538,048 acres since starting on May 29. Believed to have been sparked by an uncontrolled campfire at the Bear Wallow Wilderness within the Apache-Sitgreaves National Forest, the flames forced thousands of residents to evacuate and destroyed hundreds of homes, leaving an estimated $109 million in damages. The fires also engulfed more than 15,000 acres of New Mexico.

The National Weather Service warned of imminent wildfire-linked flood danger: “The largest wildfire in state history has burned over 500,000 acres of the white mountains…numerous locations will be vulnerable to flash floods and debris flows…some area streams and rivers are likely to see flows beyond anything seen in decades if typical or above average rains occur this summer.”

According to the Eastern Arizona Incident Management Team, at least 2,347 people were involved in the effort to contain the flames, including 14 helicopters and five air tankers.

Wildfires have been of particular concern this season, as the area has experienced extremely dry conditions.

Additionally, human error has been a factor. The Associated Press reported that of the 1,494 wildfires that occurred this year, 950 were caused by residents.

The collective amount of national burned acreage—proportional to the state of Connecticut in size—already surpassed last year’s total, MSNBC reported.

“In Florida, the Everglades area has seen 115 fires so far this year—three times the norm…At 4.2 million acres, the first half of 2011 is way ahead of the 2.9 million acres for the same period in 2006, which turned out to be the worst year on record at nearly 10 million acres burned” (ibid.).