This website requires the use of Javascript to function correctly. Performance and usage will suffer if it remains disabled.
How to Enable Javascript
Tornado Deaths Top 500 in 2011 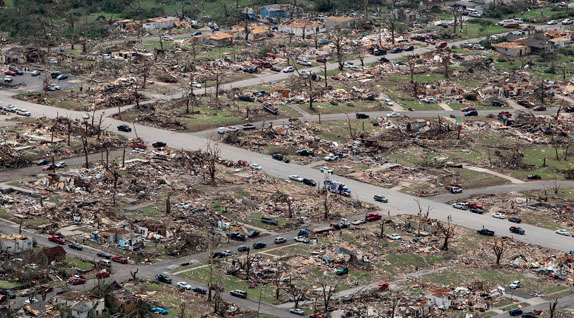 Wild weather systems throughout the United States led to a massive multi-vortex tornado—which flattened Joplin, Missouri—reports of large hailstones, and a 2011 tornado death toll of at least 500 people.

Destructive weather on May 22 spawned nearly 50 tornadoes, and came only three weeks after the largest tornado outbreak in U.S. history killed more than 300 victims.

Joplin, which was decimated by a half-mile-wide tornado, was hit the hardest. The American Red Cross estimates that more than 75 percent of the town of 50,000 people was destroyed.

“You see pictures of World War II, the devastation and all that with the bombing,” a Joplin high school principal told USA Today. “That’s really what it looked like.”

More than 20 cars and tractors were strewn across the town’s highway, and X-ray films from a wrecked hospital were retrieved as far as 70 miles away, AccuWeather reported. Missouri television station KSDK aired a story about a missing woman whose car had been found with the driver’s seatbelt still fastened, which could imply that she was “sucked out through the top of the car that was peeled off by the tornado.”

After surveying the damage, President Barack Obama said, “The main thing I just want to communicate to the people of Joplin is this is just not your tragedy. This is a national tragedy and that means there will be a national response” (UPI).

CNNMoney reported that the Joplin tornado caused up to $3 billion in insured losses.

While Joplin was the most-affected town, the storms were “part of a larger system that triggered severe weather that killed one person in Kansas on [May 21] and caused damage from Minnesota to Texas on [May 22]. At least one person was killed and 29 injured in storms that hit Minneapolis, Minn. Meanwhile, La Crosse, Wis., was also hit hard as winds tore roofs off homes and trapped residents inside” (AccuWeather).

Since the tornado swarm, severe weather has continued to ravage the United States: