This website requires the use of Javascript to function correctly. Performance and usage will suffer if it remains disabled.
How to Enable Javascript
Mississippi River Flooding Engulfs South 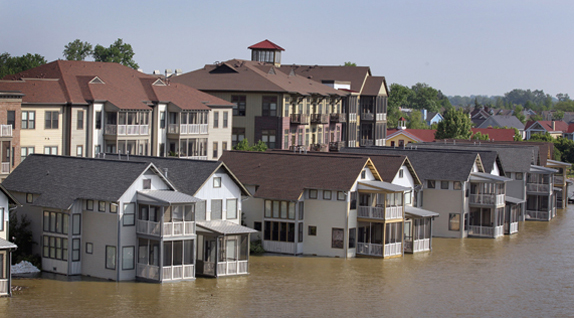 At least three people died and thousands were evacuated as massive flooding from America’s largest river swamped millions of acres in southern states.

The Mississippi Emergency Management Agency executive director estimates “…flooding in the area could reach 850 homes and between 300,000 and 600,000 acres of land, much of which is devoted to agriculture” The Wall Street Journal reported.

The potential impact on the nation’s economy and yearly harvest is alarming.

“Nearly 3 million acres of farm land in three southern U.S. states have been submerged by flood waters from the raging Mississippi River and its smaller tributaries, adding to troubles in seeding this year’s crops in the world’s top grain exporter,” Reuters reported. “Although the area constitutes 1 percent land seeded with major crops in the United States, the loss comes at a time when grains have soared due to dwindling supplies, weather woes in other exporting nations and increased consumption.”

“In Natchez, Mississippi, the river surpassed its record early Wednesday [May 11], exceeding 58 feet. Forecasts predict the river will crest in Natchez on May 21 at an overwhelming 64 feet,” CNN stated. “Mississippi already has had to close some casinos at Tunica, a key economic driver in that part of the state, as floodwaters seeped in.”

Previously, in an effort to avoid a major catastrophe, officials resorted to blasting a two-mile-wide hole into a river levee to redirect water levels and relieve water pressure. Prior to the emergency measure, river levels “stood at a record-breaking 61.72 feet” according to The Christian Science Monitor, which reported the blast “allowed water to flow into the Birds Point-New Madrid Floodway in Missouri, with the water traveling at 4.1 million gallons per second to create a 200-square-mile lake.”

Nicholas Pinter, an expert on levee construction and flood-plain management from the Southern Illinois University, told the newspaper, “It is a little bit frightening that we’ve seen such devastating flooding relatively early in the season” (ibid.).

Additional spillways are projected to be created in Louisiana as authorities strive to control the colossal river crest.

“President Barack Obama declared a major disaster in Tennessee…ordering federal aid to help state and local recovery efforts in the area,” Voice of America reported. “The president has also signed emergency or disaster declarations for other states hit by flooding and bad weather, including Louisiana, Iowa, Kentucky, Missouri and Mississippi.”

Experts anticipate flooding in the region will continue until early June.