This website requires the use of Javascript to function correctly. Performance and usage will suffer if it remains disabled.
How to Enable Javascript
Libyan Upheaval Escalates 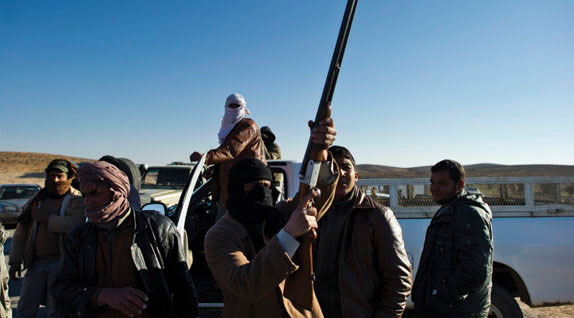 Over 1,000 people are feared dead from government backlash against Libyan demonstrators who have demanded that Moammar Gadhafi step down after 41 years as ruler. Thousands have stormed the streets in cities across the nation, and protests have continued for weeks despite armed retaliation against citizens by security forces.

“Libyan strongman Moammar [Gadhafi] offered no concessions to protesters who have shaken his regime by capturing several major cities, denouncing them as drunkards, terrorists and ‘drug-fueled mice’ who should be executed,” Los Angeles Times reported.

Vowing to fight until his “last drop of blood,” Mr. Gadhafi determined to quash the protests, while his son, Saif al-Islam, “warned that civil war could hit the country,” according to BBC News. Quoting Libya’s Quryna newspaper, Reuters wrote, “A Libyan air force plane crashed near the eastern city of Benghazi after its crew bailed out because they refused to carry out orders to bomb the city…” The article added Mr. Gadhafi threatened violence against “groups who were defying his rule.”

The havoc has halted up to 50 percent of oil production in Libya, resulting in skyrocketing prices, The Financial Times reported.

“The continuing disruption in the country, the world’s 12th largest exporter of crude, drove oil prices to a fresh 2½-year peak on Wednesday. Brent oil futures jumped 3.7 per cent to hit $110 a barrel on Wednesday for the first time since before the collapse of Lehman Brothers.”

Other nations are carrying efforts to evacuate people from the turbulent African country.

“The U.S. charted a ferry, the U.K. and China sent rescue flights and the E.U. made other plans as they moved to remove their citizens from Libya,” The Wall Street Journal reported, adding, “Italian Foreign Minister Franco Frattini warns of an immigrant exodus of biblical proportions from the strife-torn nation if Gadhafi is ousted, with 300,000 Libyans possibly fleeing the nation.”

Following political turmoil in Tunisia and Egypt, the protests in Libya added to the wave of violence spreading across the Arab world. To understand what these events should mean for the West, read “4 Lessons America Can Learn from the Riots in Egypt.”

4 Lessons America Can Learn from the Riots in Egypt
A high-ranking White House official once said, “Rule one: Never allow a crisis to go to waste.” While he was referring to missing an opportunity to take political action, Egypt’s crisis should be instructive to citizens and leaders in the United States.