This website requires the use of Javascript to function correctly. Performance and usage will suffer if it remains disabled.
How to Enable Javascript
Earthquake Devastates New Zealand 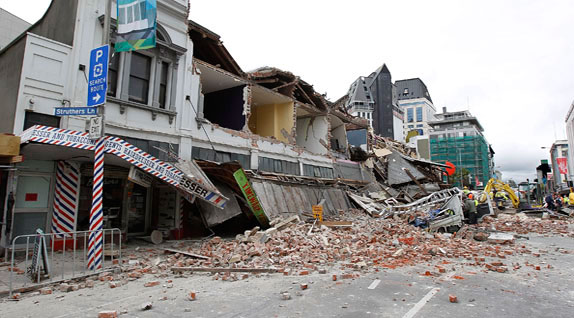 A powerful 6.3-magnitude earthquake struck the city of Christchurch, New Zealand, collapsing buildings, destroying infrastructure, and trapping many people in debris. The second quake to hit the area in a year has left at least 65 people dead and 100 trapped. Rescue teams have pulled 120 survivors out of the ruins.

The city’s mayor, Bob Parker, described the scene: “…eventually when the shaking stopped, I looked up and looked across the scene of destruction, clouds of dust rising—and that’s an ominous sign. That means collapsed buildings. And we could hear the screams from thousands of people, really in shock, in pain, in terror,” CBS News/Associated Press reported.

The country’s worst disaster in decades quickly led to a shortage of ambulances and rescue workers.

“The military has been deployed to help the rescue effort, and the government has accepted an offer of specialist help from Australia,” BBC News stated. “A series of aftershocks, some as big as magnitude 5, have already rattled the stricken city, and officials warned residents to brace for more.”

“The quake toppled the spire of the city’s historic stone cathedral, flattened tall buildings and sent chunks of concrete and bricks hurtling onto cars, buses and pedestrians below,” according to The Associated Press.

Due to the quake, more than 30 million tons of ice also fell off the country’s largest glacier, producing waves more than 10 feet tall.

“It was the latest in a series of large earthquakes to strike the area in recent months,” The New York Times stated. “In September, a 7.1-magnitude earthquake struck near the city, but caused no casualties because it took place in the early morning when virtually everyone was still at home.”