This website requires the use of Javascript to function correctly. Performance and usage will suffer if it remains disabled.
How to Enable Javascript
Egyptian President Resigns

After 18 days of protests across Egypt, President Hosni Mubarak’s 30-year rule officially came to an end with his decision to step down from power.

In a brief televised announcement, Vice President Omar Suleiman declared, “President Hosni Mubarak has decided to step down as president of Egypt and has assigned the higher council of the armed forces to run the affairs of the country,” The Washington Post reported.

Following the statement, a crowd of protesters in Tahrir Square erupted in jubilation: waving flags, dancing, and carrying one another on each other’s shoulders—chanting “victory,” “no more Mubarak,” and “Egypt is free.”

Mr. Mubarak’s resignation came as a result of increased demands by protesters who were unsatisfied with his earlier decision to stay in power.

“Egypt’s powerful army gave guarantees...that President Hosni Mubarak’s promised reforms would be carried out, but protesters insisted he quit now and cranked up the pressure by massing outside his palace,” Reuters stated.

Many people hope Mr. Mubarak’s resignation will mark the end of the massive demonstrations that have resulted in more than 300 deaths.

Reacting to the announcement, opposition leader Mohamed ElBaradei said, “This is the greatest day of my life. The country has been liberated,” USA Today reported.

Earlier in the year, The Washington Post speculated what such a move could mean for the country.

“Will an Islamist movement or a new strongman—or both—emerge to seize control, in an eerie repeat of the 1979 Iranian revolution? Or will Egypt’s secular tradition and powerful military allow for a messy transition to democracy, as happened in Indonesia in 1998? Or will it be something in between, such as the initial outcome of the Romanian revolution of 1989?”

For more on the Egyptian crisis and its implications, read “4 Lessons America Can Learn from the Riots in Egypt.” 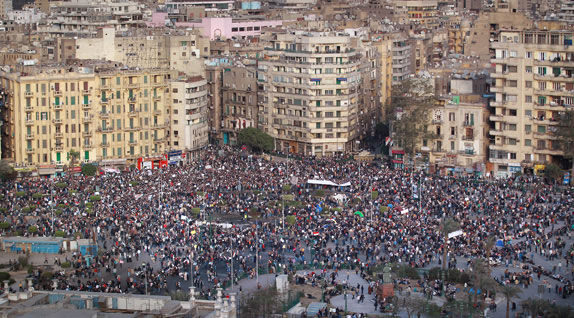 4 Lessons America Can Learn from the Riots in Egypt
A high-ranking White House official once said, “Rule one: Never allow a crisis to go to waste.” While he was referring to missing an opportunity to take political action, Egypt’s crisis should be instructive to citizens and leaders in the United States.