This website requires the use of Javascript to function correctly. Performance and usage will suffer if it remains disabled.
How to Enable Javascript
Mysterious Mass Animal Deaths 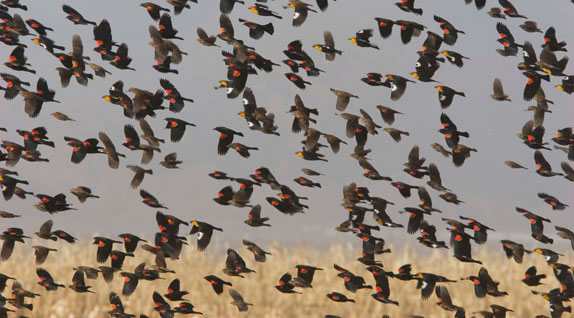 Flocks of dead birds in nations around the world, along with numerous dead fish, have caught the attention of international news media. Google Maps so far has tracked 30 incidents worldwide, with most in the United States and Europe. Scientists, bloggers and others are trying to make sense of these mysterious phenomena, with some calling it the “aflockalypse,” a play on the word apocalypse.

Scientists have since offered several explanations.

Karen Rowe, an ornithologist for the Arkansas Game and Fish Commission, asserted that the sudden mass deaths of animals such as the red-winged blackbirds are not unusual and happen across the world, often caused by lightning strikes or high-altitude hail. She explained that sometimes birds are caught in hurricane-force winds or heavy fog, and crash into cliffs or each other.

Michio Kaku, professor of physics at The City University of New York, told Fox News the incidents are not unusual and sudden mass animal deaths such as these “happen all the time.” He said these reports are only now reaching the attention of international news media because people are more interconnected than ever before, via the Internet, which allows news to travel faster than in past generations.

According to the spokesman for the Arkansas Game and Fish Commission, stormy weather (such as hail or lightning) may be at fault. Since the Arkansas incident happened during New Year’s celebrations, fireworks may have brought down the birds.

The director of the National Wildlife Health Center, in Madison, Wisconsin, also said the incidents are relatively common, and stated that his office has investigated 16 mass bird deaths in the last two decades.

According to scientists, the magnetic North Pole is shifting 25 miles a year, perhaps affecting instinctual navigation systems in birds and fish, which animals use to locate breeding grounds and warmer climates.

Other recent mass animal deaths include: