This website requires the use of Javascript to function correctly. Performance and usage will suffer if it remains disabled.
How to Enable Javascript
Economic Recession Partly to Blame for Nationwide Gun Shortage 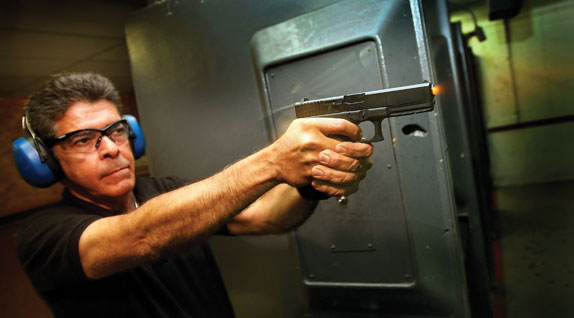 The rising demand for guns by people concerned that recent cutbacks of law enforcement officers will fuel a crime wave is contributing to alarming shortages of firearms and ammunition nationwide.

The increasing amount of first-time gun owners has caused a more than 40-50 percent boost in the demand for ammunition and guns compared to last year, and has spurred a bullet shortage, which in turn, has doubled prices on these items.

In November last year alone, the FBI recorded 7 million people who applied for background checks to buy firearms, excluding states that require no prior check, such as Virginia. About 80 percent of these consumers were first-and second-time gun buyers.

Gun shop owners say a number of factors have caused the shortage, among them: worry about the economy, gun owners stockpiling ammunition, and those concerned about the imposition of a weapons assault ban, which could prevent them from purchasing guns or ammunition in the future.

“People are panicking and buying,” one Texas gun shop assistant manager said. “The crime rate is high, and they are flat scared of what is going to happen in the next few years with the economy and the country. Manufacturers weren’t prepared for this” (Star-Telegram).

Another woman, a Michigan mother studying criminal justice, bought her first shotgun for that purpose. “The economy played a large part in my decision,” she said. “When people don’t have jobs, they might go breaking into people’s homes. I want to be safe in my home” (Time).

The New York Times reported, “…police officers in many American cities are confronting what they describe as a surge in property crime. At the same time, many are being forced to improvise and make do with less: The recession is shrinking the finances of local governments, limiting the resources of police departments.”

Certain crimes have increased since the beginning of the recession. In South Carolina, which has the second highest unemployment rate in the country, property crimes rose at least 14 percent last year.

South Carolina officials have also reported higher levels of home burglaries, with thieves stealing anything they can pawn.

“When people get desperate, they’re going to feed their family,” said South Carolina Sheriff Leon Lott, who “has noticed a pronounced increase in insurance fraud and credit card scams” (ibid.).