This website requires the use of Javascript to function correctly. Performance and usage will suffer if it remains disabled.
How to Enable Javascript
World Reacts to Historic Presidential Win 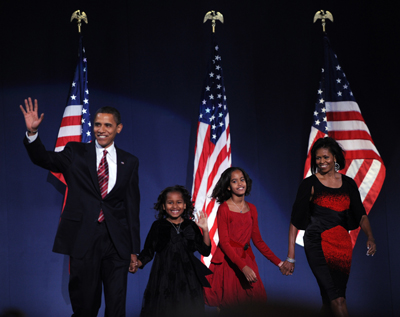 Olivier Douliery/Abaca Press/MCT
U.S. Senator Barack Obama (D-IL) comes out to greet the crowd, along with his wife, Michelle, and children Malia, 10, and Sasha 7, at his Election Night Rally in Grant Park, Chicago, Illinois, Nov. 4, 2008.

Celebrations erupted across the world as American citizens elected Barack Obama to be the 44th president of the United States.

Newspaper headlines from Azerbaijan to Argentina speculated about what kind of changes a presidency under Mr. Obama would bring to the world, who has been viewed as a global denizen and force of international unification.

Chandra Bhan Prasad, a prominent Indian author: “This is America’s second revolution, and Obama’s victory will boost the esteem of the underprivileged social classes and ethnic groups the world over” (Washington Post).

Samir Saadi, a Saudi journalist: “Given Obama’s name, his background, the doubts about his religion, Americans still voted for him and this proved that America is a democracy,’ he said. ‘People here are starting to believe in the U.S. again’” (ibid.).


Viktor Yerofeyev, Russian novelist: “The choice of an African American president in the United States overturns the whole idea of the stiff and conservative America. This means that America did wake up. This means that America is again open for free and democratic values. America has once again become a good model to emulate. It has again become a great country” (ibid.).

Kenya, the nation from where Mr. Obama’s late father was born, even declared a national holiday to celebrate the U.S. senator’s victory to the “most powerful office on earth” (Daily Nation).

Many world leaders were equally optimistic.

Australian Prime Minister Kevin Rudd: “Senator Obama’s message of hope is not just for America’s future, it is also a message of hope for the world as well” (Washington Post).

Irish Prime Minister Brian Cowen: “Barack Obama’s remarkable personal story—allied to his eloquence and his huge political talents—sends a powerful message of hope to America’s friends across the world” (ibid.).

Jose Manuel Barroso, European Commission President: “I sincerely hope that with the leadership of President Obama, the United States of America will join forces with Europe to drive this new deal. For the benefit of our societies, for the benefit of the world” (Jerusalem Post).

Russian President Dmitri Medvedev: “Russian-U.S. relations are historically an important factor of stability in the world. They are of great and sometimes, of key importance for resolving many pressing international and regional problems…We are confident that it is necessary to step-by-step enhance cooperation between our countries on a wide range of issues on the world agenda, but also to really promote bilateral interaction in all areas” (Itar-Tass).

French President Nicolas Sarkozy: “By choosing you, the American people have chosen change, openness and optimism…At a time when all of us must face huge challenges together, your election raises great hope in France, in Europe and elsewhere in the world” (AFP).

Kenyan Vice-President Kalonzo Musyoka: “It is exciting for Kenya not only because of continental attachment to President-elect because of his roots in Kenya but because Obama victory is a harbinger of good tidings especially for our tourism sector” (Daily Nation).

Chinese President Hu Jintao: “The Chinese government and I myself have always attached great importance to China-US relations. In the new historic era, I look forward to working together with you to continuously strengthen dialogue and exchanges between our two countries and enhance our mutual trust and cooperation on the basis of the three Sino-US Joint Communiques, with a view to taking our constructive and cooperative relationship to a new high and bringing greater benefits to people of our two countries and the rest of the world” (China Daily).

Venezuelan President Hugo Chavez: “The historical election of an Afro-descendant to rule the most powerful nation of the world is a symptom that the epoch change that has been gestated from the South of America could be knocking the doors of United States” (Agencia Bolivariana de Noticias).

BBC News also outlined the “Top 10 foreign challenges for Obama,” alluding that there could be “problems in new areas of al-Qaeda activity, especially Algeria and Somalia” when he takes office.

Although most government officials were excited about the historic win, several tried to be realistic.

The Jerusalem Post: “‘We are not the first priority,’ one senior diplomatic official said, reflecting the consensus thinking in the Foreign Ministry. According to this thinking, the new president will first need to tackle the economy, the situation in Iraq and Afghanistan, the tension with Russia and a worsening situation for the U.S. in South America—the U.S.’s ‘own backyard’—before tackling the Middle East conflict.’”

Der Spiegel also featured a series of commentaries from various European leaders about what they want to see under the new president-elect.

Margot Wallström of Sweden, the vice-president of the European Commission: “The U.S. has been particularly successful in creating growth and jobs, and maintaining competitiveness through technological innovation rather than low labor costs. The EU on the other hand has brought forward an ambitious climate change package and works hard to promote social justice. As we have seen in Scandinavia—where the concept of the flexicurity seems to have been born—it is possible to combine economic growth with social justice…I believe the era of U.S. unilateralism is over, and that partnership with Europe has become a central plank of U.S. foreign policy.”

Democrats in the United States were equally elated about Mr. Obama’s win.