This website requires the use of Javascript to function correctly. Performance and usage will suffer if it remains disabled.
How to Enable Javascript
Japan Welcomes New Prime Minister 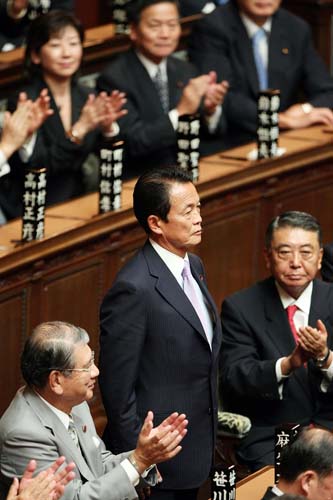 Taro Aso became Japan’s prime minister after claiming victory in the elections of the House of Representatives. Mr. Aso stepped into a position from which his two predecessors resigned after little more than a year each—a position both men left due to their inability to pass any legislation through a parliament hostile to them and their party.

Despite facing opposition from rival parties in the parliament, Mr. Aso has a plan. “It now appears certain that Aso will immediately dissolve the Diet [parliament] and call for general elections,” Professor Tomohiko Taniguchi at the Keio University told Inter Press Service.

Mr. Aso’s domestic popularity may account for his decision to call these risky elections. If his party claims a majority of the seats, it would give him the ability to pass legislation, which his predecessors lacked.

In less than 24 hours of taking office, Mr. Aso was already working. Being the first Japanese prime minister in three years to attend a United Nations summit in New York, he shows plans for a future when Japan will be more active internationally.

Already he has taken steps to smooth Japan’s rocky relationship with neighboring China. And, as one of the world’s largest economies, he hopes to establish a permanent seat on the UN Security Council for his country.