This website requires the use of Javascript to function correctly. Performance and usage will suffer if it remains disabled.
How to Enable Javascript
9/11: Seven Years Later 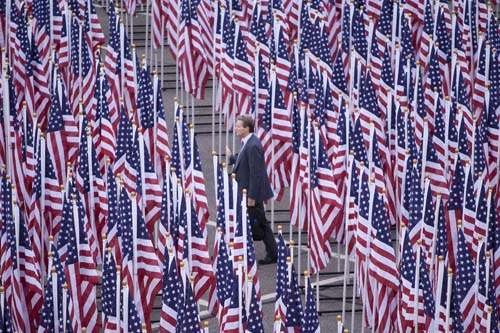 MCT
A field of over 3,000 American flags adorn the “Healing Field” at the Pentagon.

Ceremonies in New York, Washington, D.C. and Shanksville commemorated those who perished on September 11, 2001, when terrorists hijacked four airliners in an unprecedented attack on symbolic buildings in the U.S.

Though one can no longer feel as sharply the wounds incurred at New York’s World Trade Center, the Pentagon, and a small field in Shanksville, Pa.,  9/11 is a day that remains a powerful memory in America’s thoughts. On the anniversary of that date, the nation continues to come together to remember the horror that occurred and the lives that ended.

Across the street from the site where the World Trade Center towers once stood, thousands gathered in Zuccotti Park to listen to students and representatives from over 90 countries read aloud the names of those who perished.

At 8:40 a.m., bagpipes began playing. A local children’s choir sang the Star-Spangled Banner. Loved ones expressed their remembrances of the deceased. And moments of silence were observed at 8:46 a.m., when the first plane collided into the North tower; at 9:03 a.m. when the second plane hit the other tower; and at 9:59 and 10:29, the times when the northern and southern towers collapsed, respectively.

The annual ceremony, which has remained an important part of New York City for the last seven years, was attended by both presidential candidates John McCain and Barack Obama.

In Washington, D.C., President George W. Bush dedicated the Pentagon Memorial as a tribute to the 184 people who died when another hijacked plane crashed into the Pentagon. A field of over 3,000 American flags adorned the “Healing Field” and rescue workers who responded on the day of the attack stood at attention as a bugler played taps. Amid the ceremony, a lone bagpiper played “Amazing Grace,” as rows of benches covered with blue cloths and embroidered with the U.S. flag were unveiled by members of the Armed Services. The benches are the centerpiece of one of the nation’s first official September 11th commemorative sites.

James Laychak, president of the Pentagon Memorial Fund, said, “This is something to be uplifted about, a place where people can find peace and healing” (Washington Post).

In Pennsylvania, hundreds of mourners gathered in the field where United Airlines flight 93 crashed into the ground on 9/11. On that day, realizing that the hijackers intended to use their jetliner as a weapon against more citizens, the passengers fought back against their captors, and eventually the plane crashed before reaching its unknown target.

Since then, beginning at 9:55 a.m. every year, the names of the crew and the 40 passengers who lost their lives are read aloud and a bell is chimed twice in remembrance of their sacrifice. This year’s theme of the memorial is “Their Courage—Our Commitment.”