This website requires the use of Javascript to function correctly. Performance and usage will suffer if it remains disabled.
How to Enable Javascript
Timeline of the Georgian Conflicts

Timeline of the Georgian Conflicts 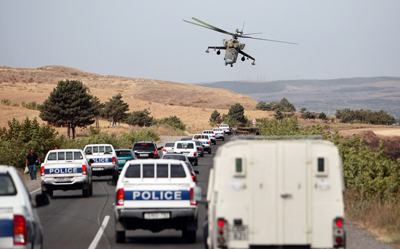 Chris Hondros/Getty Images
A Russian attack helicopter hovers over a convoy of Georgian police and international journalists on August 14, 2008 in the outskirts of Gori, Georgia.

The brief but intense conflict between Russia and Georgia has calmed for the time being, allowing the opportunity for a negotiated ceasefire to take effect. Below is a chronology outlining the first two weeks of events.

August 4: Five battalions of Russian troops staged themselves near the Roki Tunnel, which links North and South Ossetia.

August 6: Georgian President Mikheil Saakashvili agreed to an open dialogue with the Ossetian government and called for international intercession to bring an end to hostilities.

August 7-8: After Ossetian units fired artillery strikes into three Georgian villages, Georgia responded with heavy artillery fire into Tskhinvali, South Ossetia’s capital. By the end of August 8, Georgian forces controlled most of the city. Russian Prime Minister Vladimir Putin condemned the attacks, stating that Russia would be compelled to retaliate. Russian President Dimitri Medvedev called an emergency session of the Parliament to ascertain the nation’s options in the conflict. Thirty minutes later, Russian fighter jets were alleged to have dropped bombs upon civilian targets in Kareli and Gori, two Georgian towns near South Ossetia.

August 9: Heavy fighting between Russian and Georgian troops continued. CNN reported that an airfield near Tbilisi was being bombed by Russian fighter jets. According to Reuters, Russian fighter jets repeatedly bombed Georgian artillery positions outside Tskhinvali. The Georgian government claimed that 60 civilians were killed in Gori when a Russian bomber missed its target.

August 10: Vladimir Putin stated he believed South Ossetian reintegration was, at this point, impossible and earmarked approximately $425 million in humanitarian aid for the region. Mr. Putin said he wanted to leave a permanent peacekeeping force in the area for security purposes. Despite an ordered ceasefire, Russian troops continued to attack Georgian forces, which they claimed had not withdrawn from Tskhinvali. Georgian officials said that Russian fighter jets bombed Georgia's international airport shortly before the arrival of French Foreign Minister Bernard Kouchner. A Georgian navy missile boat was sunk off the coast of Abkhazia after it entered a Russian-designated safety zone.

August 11: Georgian officials claimed Russian forces were attempting to take control of Gori, located along the nation’s main highway—effectively cutting Georgia in half. There was concern that Russia’s objective was to remove the government from power. Moscow issued an ultimatum to Georgian forces near Abkhazia: withdraw or face attack. President Saakashvili rejected the ceasefire offer, saying Russia wanted to replace his government and control all energy routes through the Caucasus Mountains.

August 12: Ceasefire orders appeared to take hold, as the fighting between Russia and Georgia diminished. Mr. Saakashvili said that Georgia would declare Russian peacekeepers as occupiers and the breakaway states of Abkhazia and South Ossetia as occupied territory. Georgia also filed a lawsuit with the International Court of Justice, accusing Russia of ethnic cleansing. The deputy speaker of the Russian State Parliament called for Moscow to recognize Abkhazia and South Ossetia as independent states.

August 13: Russian troops occupied both Gori and Senaki. Russian soldiers were also seen on the road from Gori to Tbilisi, but turned off to the north about an hour from Tbilisi, and encamped.

August 14: Dmitry Medvedev met with Eduard Kokoity, South Ossetia’s president, and Sergei Bagapsh, president of Abkhazia. They signed the six principles for resolving the Georgian-South Ossetian and Georgian-Abkhazian conflicts. Mr. Medvedev said Russia would support any decision on the status of South Ossetia and Abkhazia made by the peoples of the two de facto states. He also declared the need for a legally binding treaty abstaining from the use of force, to be signed by all parties, whose points would be enforced by Russia and the European Union.