This website requires the use of Javascript to function correctly. Performance and usage will suffer if it remains disabled.
How to Enable Javascript
Overview: The Russia-Georgia Conflict 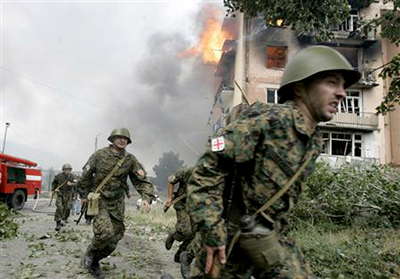 Lee Allen/Biloxi Sun-Herald/MCT
Georgian troops run for cover during a battle with Russian forces in Gori, northwest of the Georgian capital of Tbilisi.

On August 8, Russian troops moved into the nation of Georgia, capturing the city of Tskhavli and conducting precision strikes that crippled the Georgian military.

Russia claimed it was acting in defense of Russian citizens living in Georgia’s breakaway province, South Ossetia, in response to Georgia’s artillery attack on Tskhavli the day before, which killed close to 2,000 people and left tens of thousands as refugees.

Georgia’s August 7 assault was the latest of sporadic yet bloody fighting that was a re-imaging of the fighting between South Ossetia and Georgia in late 1991.

As fighting escalated between the two, Georgia accepted a ceasefire in order to prevent a larger conflict with Russia. Since then a combined force of Georgians, Ossetians and Russians have worked to maintain the peace, while overseen by European assistance.

A small skirmish on August 1, 2008, between Ossetian irregular army troops and the Georgian military snowballed into the large scale artillery attack on Tskhavli seven days later. Claiming that civilians and several Russian peacekeeping troops were killed during the shelling, Moscow deployed several thousand troops, along with tanks and armored personnel carriers, into South Ossetia. Russian President Dmitri Medvedev called the attack on the Ossetians “genocide,” and said his country was “seeking to force the Georgian side to peace” (International Herald Tribune).

Russia quickly took control of the area, and also sent paratroopers into Abkhazia (another province that had declared independence from Georgia) to further destabilize the Georgian military defense.

News analysts speculate that Moscow sent troops to further secure Russia geographically and economically. Russian oil giant Gazprom is heavily invested in South Ossetia and may have interest in Georgia’s oil and natural gas resources in mind. It is further speculated that more than two-thirds of the South Ossetian government’s funding comes from Russian coffers, making the continued existence of a pro-Russian stance in Tskhavli in both parties’ best interests.

Analysts also point to Russia’s strong distaste for a potential NATO member on its borders. Georgia had been strongly vying for membership into the organization, which Russian Prime Minister Vladimir Putin views as a “direct threat” to his country. Russia’s recent military action creates a much stronger geographic buffer zone economically and geographically.

Meanwhile, Georgia feels it was justified in attacking Tskhavli. After being elected as the nation’s president, Mikheil Saakashvili expressed desire to re-unify Georgia and to bring South Ossetia and other provinces back into Georgia’s fold.

Subsequently, many South Ossetians who once might have agreed to reunification with Georgia may now, after the attack, oppose the idea. Zema Kulumbegova, a 43-year-old part-time English teacher, said, “…if you beat a dog, it will run away. If we become part of Russia, I think that the way we live will in many ways be better than it is now” (International Herald Tribune).

South Ossetia’s population has largely been evacuated into Russia.

Leaders in the international community expressed hope that Russia and Georgia will hammer out the details for a tentative peace plan that will return both sides to their positions prior to the conflict. Though it was the central issue of the conflict, the status of South Ossetia remains undefined.