This website requires the use of Javascript to function correctly. Performance and usage will suffer if it remains disabled.
How to Enable Javascript
FDIC Allays Fears Over IndyMac’s Turmoil

In the wake of the third-largest bank failure in United States history, the Federal Deposit Insurance Corporation (FDIC) reopened IndyMac Bank, allaying fears of homeowners and investors over the bank’s collapse.

The federal government took over the high-risk mortgage lender when it no longer had sufficient cash to meet the demand of its depositors, which had run to more than $11.3 billion. The bank run was allegedly caused by U.S. Senator Charles Schumer’s (D-New York) interference over IndyMac “pushing the envelope” in lending standards. On the other hand, John Reich, director of the federal Office of Thrift Supervision, said that IndyMac “failed due to a liquidity crisis”—that is, it ran out of money (NPR).

FDIC chairman Sheila Blair assured homeowners they would not lose their homes: “The agency is really focused on keeping borrowers in their homes for both their sakes and to maximize IndyMac’s value for taxpayers,” she told the Wall Street Journal. “We will aggressively pursue loan-modification strategies for affordable loans to make them affordable on a long term, sustainable basis.”

Investors of IndyMac—renamed IndyMac Federal Bank—with deposits up to $100,000 are federally insured. However, up to one billion deposits are uninsured and will only receive 50 cents on the dollar, affecting 10,000 customers. To rescue IndyMac, the FDIC will need to shell out $4-8 billion.

With $32 billion in assets, IndyMac was founded in 1985 by David Loeb and Angelo Mozilo to cater to mortgage loans in purchasing and developing single-unit residences.

The bank’s failure is attributed to several factors:

Analysts see the IndyMac bank failure as a leading indicator that more banks will fail, quoted as only the smallest tip of the iceberg of more bad news to come. 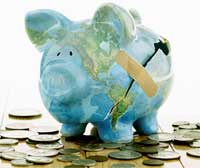 America’s Banking Crisis – A Financial Tsunami Approaching!
The intensifying American banking crisis threatens the stability of its economy and the world’s. Where is it leading?