This website requires the use of Javascript to function correctly. Performance and usage will suffer if it remains disabled.
How to Enable Javascript
Few Survive Philippine Ferry Sinking 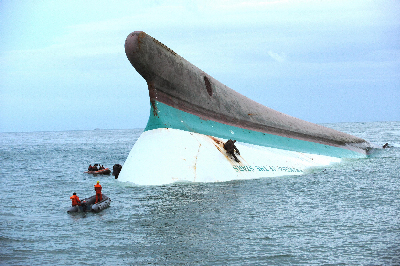 Romeo Gacad/AFP/Getty Images
Philippine Coast Guard rescue personnel approach the bow of the sunken ferry MV Princess of the Stars off the coast of central Sibuyan island on June 23, 2008. Philippine rescue divers have found "many" bodies inside a passenger ferry that sank in a typhoon with more than 850 people on board, a navy spokesman said.

Hope of finding more survivors of the ferry that sank due to Typhoon Fengshen, MV Princess of the Stars, is fading. The Philippine Navy and Philippine Coast Guard divers managed to enter the capsized ship, but found only dead bodies, the number of which rescuers could not determine due to darkness.

The 23,824-ton capsized ferry carried more than 850 passengers and crew. According to authorities, 67 people have been found alive, 28 were reported dead, and more than 700 hundred people are still missing.

MV Princess of the Stars, owned by Sulpicio Lines, one of the largest shipping companies in the country, left Manila Friday, June 20, around 8 p.m. after it was given permission to travel by ship engineers, the Philippines Coast Guard and the Maritime Industry Authority. Sally Buaron, vice-president of Sulpicio Lines, said the vessel was in good running condition when it left port and that it would have turned back had it been given warning.

Later, the captain later reported the ship had been experiencing engine trouble.

Entering the Philippines on June 20 with winds up to 121 mph, Typhoon Fengshen’s center path, which moved between Leyte and Samar in central Philippines, was the hardest-hit region in the country. It headed toward the South China Sea, but veered its deadly course north to Manila. The next day, it capsized MV Princess of the Stars near Sibuyan Island around 12:30 p.m.

Typhoon Fengshen affected virtually all parts of the country. In Davao City, rooftops whistled due to abnormally strong winds, while in Cotabato City, it destroyed houses and toppled electrical power lines. In Davao Oriental, the eastern part of Mindanao, thousands of families were affected. Heavy damages were also reported in northern Luzon.

Iloilo province was the hardest hit, with a death toll of 101 people. An estimated 30,000 had to scramble to rooftops of houses to survive floodwaters from an overflowing dam, forcing 200,000 people to evacuate. Governor Neil Tupaz said it was the worst flood the province suffered in its history.

U.S. embassy officials in the Philippines said the USNS Stockham, under U.S. Pacific Command, will help with the search and retrieval operation.