This website requires the use of Javascript to function correctly. Performance and usage will suffer if it remains disabled.
How to Enable Javascript
Follow-up: Xenophobic Violence in South Africa 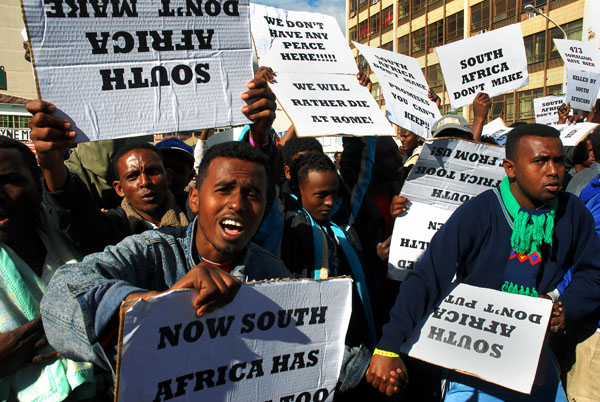 AFP/Getty Images
About 2,000 people march through the streets of Cape Town in protest of the xenophobic attacks, which killed more than 60 people in May.

Residents of the Alexander township in Johannesburg took to the streets on May 11 and attacked foreigners who lived among them. The violence soon escalated to other regions of the Gauteng province. During the week it lasted, police reported that 62 people were killed with a further 670 injured in the sporadic attacks across South Africa.

More than 50,000 foreigners fled their homes as mobs armed with knives, sticks and petrol bombs moved through various regions and began looting and setting fire to their victims’ belongings. Police stations and churches were overrun with people seeking protection from mobs who had vowed to kill them all.

News images of a man set on fire brought back visions of the old apartheid era, when the “necklace method” of killing (placing a tire around a person’s neck, filling it with gasoline and setting it on fire) was often used to execute traitors.

“In his most comprehensive response yet to the recent xenophobic violence, President Thabo Mbeki yesterday acknowledged that the attacks had done enormous harm to [South Africa’s] standing in the world” (Business Day).

“Both through the struggle against apartheid, as well as in the manner in which we defied formidable odds to find a peaceful political solution, we gave hope that it was possible for the peoples of the world to be united in their diversity,” Mbeki said. “However, events of the last few weeks—of criminal attacks on immigrants—have impacted negatively on our collective standing as frontline troops in the global struggle for a humane and tolerant world” (ibid).

It was reported that the main cause for the uprising was a result of local citizens feeling they were being deprived of jobs, which were rapidly being taken over by foreigners. Since the end of apartheid in 1994, the current government has neglected to enforce strict border controls, resulting in immigrants from Zimbabwe, Mozambique, Malawi and other African countries streaming over the border in search of a better life.

The Gauteng province was the hardest hit by the violence. Because police lacked the manpower to deal with the problem, additional security personnel were brought in from other provinces. President Mbeki also invoked the help the South African Defence Force to assist police in bringing the situation under control.

At a summit on racism held in the Mpumalanga province in 2005, Ehlanzeni district municipality mayor Jeri Ngomane warned that tribalism, class, privilege and xenophobia was the new face of racism in South Africa. He also said, “People were balkanized into [ethnic homelands]. This institutionalized racism and ultimately led to xenophobia with each group trying to protect their own terrain and [privileges]” (Mail & Guardian).

As thousands have already fled beyond the South African borders, the government has made it a top priority to reintegrate the remaining thousands of displaced foreigners back into the community. Living in special camps that were setup in conjunction with the United Nations, many feel they cannot return to the communities from which they fled in fear of persecution.

The attacks have broken down many of the relationships that South Africa built with its African neighbors in the post apartheid era. Opposition parties have put much of the blame for the attacks on the government (led by the African National Congress party) which, with its quiet diplomacy towards the situation in Zimbabwe, has allowed millions of refugees to cross illegally into the country.

More and more, South Africans feel that illegal immigrants flooding the nation’s job market will affect the future of their children. The current stability after the attacks is fragile, and it is felt that unless the government urgently addresses social and economic issues, the future stability within the country will be affected. There is also growing concern that escalating turmoil in neighboring Zimbabwe will cause more xenophobic attacks to occur.