This website requires the use of Javascript to function correctly. Performance and usage will suffer if it remains disabled.
How to Enable Javascript
Police Killings Mark Increase in Mexican Drug Violence 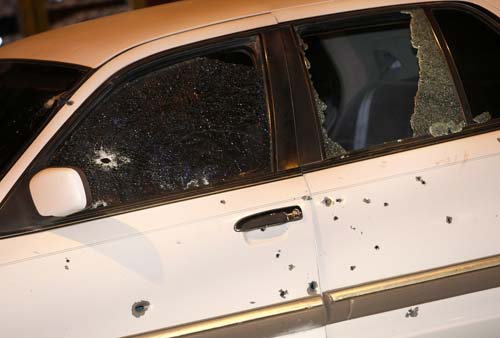 Tom Pennington/Fort Worth Star-Telegram/MCT
Bullet holes riddle a police car after a Municipal Police captain was shot and killed in Juarez, Mexico.

The drug war has led to at least 1,100 deaths since January. If the death rate remains the same, the number of deaths in 2008 will surpass last year’s total of about 2,500.

The violence is said to be a response to policies implemented by Mexican President Felipe Calderon, who declared war on the cartels upon taking office in 2006, and has authorized the use of over 25,000 armed troops to combat drug trafficking.

At a memorial service for one of the fallen officers, President Calderon confirmed his commitment to fighting the war on drug cartels. He said that organized crime groups were striking back against the federal government “because they know we are hitting their criminal structure.” He also said the government is “determined to recover streets that never should have ceased being ours” (LA Times).

The U.S. State Department estimates that 90% of cocaine enters the nation via the Mexican border. Mexican cartels also grow marijuana and run methamphetamine labs in the U.S.

More than a month after over 2,000 soldiers were dispatched to Juarez, Mexico, execution-style murders remain commonplace as drug cartels battle for control of smuggling routes into the U.S.
Additionally, the drug gangs are linked to kidnapping, human and arms trafficking, and auto theft. Gruesome violence is also used, including beheadings and other brutal forms of torture.

Much of the conflict occurs at the border, where cartels fight one another and the government for control of illegal trade routes into the U.S. The Mexican border town of Juarez, which is across from El Paso, Texas, has been one of the worst hit.

Last weekend, Municipal Police Chief Juan Antonio Roman was gunned down near the steps of his house, becoming the third senior police official to be killed in Juarez that week. Investigators estimate that assailants fired over 60 shots. Officer Roman’s name had been on a hit list left by cartel members at a police monument in the city.

In response to this unhampered violence and the brazen killings of police officials, thousands of citizens wore white and silently marched Juarez’s streets in protest.

U.S. President George W. Bush has asked Congress to approve a $500 million emergency aid package for the area, which will include helicopters and additional training for Mexican police in stopping smuggling and decreasing police corruption.