This website requires the use of Javascript to function correctly. Performance and usage will suffer if it remains disabled.
How to Enable Javascript
Abuse and Rape Part of Life for Darfur Women

Abuse and Rape Part of Life for Darfur Women 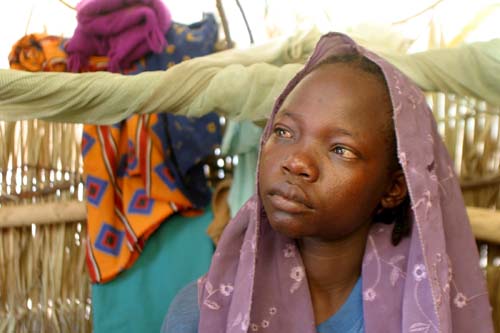 MCT
Is there recovery?:
A 14-year-old girl, who was raped outside of a refugee camp when she was collecting firewood, sits in her makeshift shelter in the Kalma IDP camp in South Darfur. Across the region, relief workers and refugees increasingly report of rapes and beatings by the Janjaweed, who stalk women searching for firewood, creating a climate of fear and insecurity.

Five years of conflict in the Darfur region of Sudan, women and girls in the internally displaced persons (IDP) camps, as well as rural areas, live in constant fear of violent sexual attacks and have no way to gain justice for crimes committed against them, according to a report by Human Rights Watch (HRW).


The report, titled “Five Years On – No Justice for Sexual Violence in Darfur” shows the problem of sexual violence has gone unabated for years. A humanitarian organization, Medecins sans Frontieres, treated almost 500 women and girls from October 2004 to February 2005. In 2006, IRIN news agency reported that during a five-week period there were over 200 reports of sexual assault.

However, the number of actual rapes and sexual assaults is impossible to know because of what HRW calls “chronic underreporting.”

Complicating matters, the sexual crimes are being committed by persons at nearly every level of society. Rebel groups, military personnel, police, militia and criminal gangs have all been accused of perpetrating rape and assault.


Despite military efforts by the African Union, efforts by individual relief organizations and repeated promises by the Sudanese government to address the issue, the crisis continues relatively unchecked. The HRW said that all “measures have so far failed to address root causes of sexual violence, prevent pervasive and persistent incidents of sexual violence throughout Darfur, or reverse the climate of impunity that perpetuates it.”

As of December 2007, peacekeeping in the region was charged to the United Nations African Mission in Darfur (UNAMID)—the largest-ever peacekeeping mission of 26,000 uniformed personnel. But four months after assuming the responsibilities, only about 1/3 of the promised forces have been deployed.

Armed groups target IDP camps because of the presence of international aid organizations. Large scale looting and banditry takes place and UNAMID forces constantly come under attack. During these raids, crimes of sexual violence against woman and girls are common.

A Sudanese member of parliament, Salih Mahmoud Osman, said that most offenses were committed in the presence of male relatives of the woman, such as their husbands, fathers and brothers, and that “rape is used as a weapon of war.”

He said that one of the problems in bringing the perpetrators to justice was the fact that the Sudanese court was in contravention with international standards, which makes it almost impossible to bring cases to conviction. The law of evidence by using medical reports is not recognized by the court and the only way to prove rape is to bring four male witnesses.

To address the problem, the international community has deployed more troops to the region to try to end the attacks on civilians as well as instruct the Sudan military forces in the correct procedures in dealing with sexual violence. Deployments of high-ranking women, who are trained in dealing with the sensitive nature of the problem, are being sent to the IDP camps.

Even with these measures in place, soldiers stationed in bases near the IDP camps wait for woman to leave these camps to perform their daily survival activities. There have been reports of women being kidnapped and raped. The victims are then sent back to the camps in the nude.

The UN has said that 80% of the UNAMID troops will be in place by the end of the year. With increased security in the region, it is hoped that the forces will be able to finally slow the sexual violence crisis.