This website requires the use of Javascript to function correctly. Performance and usage will suffer if it remains disabled.
How to Enable Javascript
Inactive Children at Greater Risk of Heart Disease 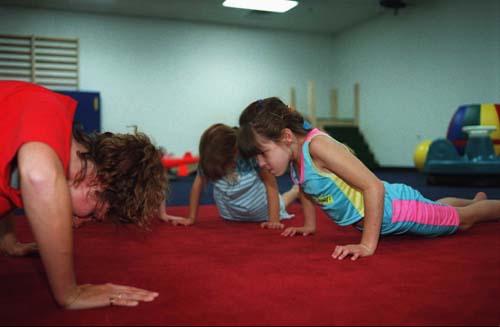 MCT
Children are led in push-ups at My Gym in Altamonte Springs, Fla. Programs like this help children fulfill the 60 minutes of exercise that experts recommend per day.

According to a new study published in the journal Dynamic Medicine, children who are physically inactive are six times more likely to develop heart disease early in their teenage years than those who are more active.

The study, led by Dr. Robert McMurray from the University of North Carolina at Chapel Hill, observed the daily physical activity and aerobic fitness routine of 389 children ages 7 to 10, and examined their body mass index and blood pressure. Seven years later, he examined the same children as they entered their early teens.

Researchers observed the link between inactivity during childhood and an increase in metabolic syndrome in teenagers—which includes high blood pressure, high cholesterol, diabetes and obesity.

Final tests showed that youths who developed at least one aspect of metabolic syndrome led an inactive lifestyle.